Wurzburg: Will This Diocese Have to Sign the Doctrinal Preamble Too? 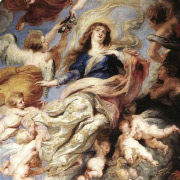 Denial of the Council: The church paper of the Diocese of Wurzburg has distorted the secure secret of the Assumption into its opposite.

(Kreuz.net) The 'Catholic Würzburg Sunday News' is the church paper of the Diocese of Würzburg. Your editor is the old liberal Wolfgang Bullin.

What is the Assumption?

The actual number published a rabidly heretical interpretation of the Solemnity of the Assumption.

The doctrine was declared at first November 1950 by Pope Pius XII. in the Apostolic Constitution "Munificentissimus Deus".

The body of the church newspaper even quotes from it: "The spotless, perpetual Virgin Mary Mother of God, after she had finished their earthly life, was assumed body and soul into heavenly glory."

Now it twists
.
This statement is turned into its very opposite, for example, the church newspaper maintains that the phrase is "problematic for many". But the problems are only the twisting of the diocesan sheet. This works with a little known distinction between soul and body: "Actually, a body does not mean corpus." [The distinction between Leib and Korper in German is something like the distinction between figure and person.]

That's right front is not rear

Then, they lied without batting an eyelid. When it means, "that Mary's body and soul went to God, so this is nothing other than what the Christian faith for all hoped for: that we human beings as a whole person, as an unmistakable I is taken after death to God."
From front to back, that's wrong.

The Mother of God is a special case

The souls awaiting the saints in heaven - with the exception of the Mother of God - await the resurrection the flesh and union with her, who are ​still in the ground with their dormant corpses or bodies.

This is something that the incompetent leaders of the 'Würzburg Catholic Sunday Journal" would have been able to read in every child's Catechism.

The article provides an open rejection of the Second Vatican Council.

It can be found in the Church Constitution Lumen Gentium 68:

". In the interim just as the Mother of Jesus, glorified in body and soul in heaven, is the image and beginning of the Church as it is to be perfected is the world to come, so too does she shine forth on earth, until the day of the Lord shall come,(304) as a sign of sure hope and solace to the people of God during its sojourn on earth. "

In other words, what is applicable to the Mother of God, is not even for everyone else.

Completely fallen from the faith

Pius XII. speaks in "Deus Munificentissimus" about the heretical authors such as the bishopric of Würzburg spreading such heresies, with the following judgment:

"Therefore, if God forbid anyone deny this truth, which has been defined by us, consciously, or dares to question it, let him know that he has dropped completely from the divine and Catholic faith. "

This scandal in the diocese of Würzburg can not easily be ignored.
Link to kreuz.net...