Energetic Female Religious Running Out of the Church 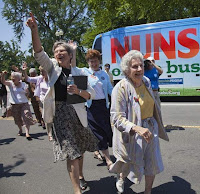 Detroit — Nuns from Michigan and throughout the nation are assembling in St. Louis this week to prepare their response to a Vatican crackdown that criticized their loyalty and accused them of "radical feminism." This spring, the Vatican ordered a review of the umbrella group of the nation's 55,000 nuns, the Leadership Conference of Women Religious, claiming the sisters had gone rogue, focusing on social justice issues and neglecting church teachings on subjects including contraception, abortion and homosexuality. The rift, which has sparked a split among the faithful and a wave of sympathy for the nuns, is being felt in Metro Detroit.

This is what happens to you when you walk the labyrinth too fast.

A full list of Covens can be found on their links page.

I can understand that a tiny proportion (much smaller than 55,000 sisters)might fall out of grace with their prideful disobedience in promoting evil. Their disobedience was again Jesus in His unerring, unchanging Church, not their bishops who encouraged them by their own disobedience. What I can't understand is how anyone old enough for death to come knocking at any moment could still embrace their Mortal Sins.

But that would take grace, which is a rare commodity in the Conciliar Church with it's Freemason worship service, denial of sin and suppression of Sacraments. I never think of sisters (nuns wear habits and are cloisters) when I pray but I will add them now. Nobody should go to Hell because they were not prayed for.