Turkey Rules One of The Oldest Monasteries in the East 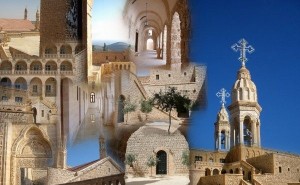 (Ankara) The appellate court in Ankara decided at the last moment against the monastery, which now loses up to 28 acres of its grounds, as the Turkish government and the economic existence of the monastery is withdrawn. Thus, at least at the national level Mor Gabriel is decided to the detriment of the ongoing dispute since 2008. Like so many anti-minority judgments which are applied can only be continued or appealed at EU level or before the European Court of Human Rights.
The legal land dispute has demoralized the tiny Syrian-Orthodox Community within and outside of Turkey since 2008, which touches upon Mor Gabriel, touches the last important spiritual center of this faith communion in the northern Mesopotamian area of origin of Tur Abdin.  Plaintiffs against More Gabriel were also the surrounding Kurdish inhabitants of three villages, who live with about 2,000 Aramaic Christians, and makes their existence even more difficult amidst the overwhelming Muslim majority in the Kurdish region.
The most recent and initial final judgment is also a direct affront to all those who had campaigned in Turkey and abroad to preserve the property rights of Mor Gabriel: In Turkey, in June 2012 some 300 intellectuals, expressed public solidarity with Mor Gabriel. Around the same time, the German Bundestag had adopted at the request of the ruling factions of the CDU / CSU and FDP, a decision to protect the monastery.
Text: AGA / Linus Schneider
Picture: AGA
Link to original...katholisches.
Posted by Tancred at 12:04 AM