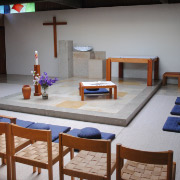 Germany.  The chapel which is run by the Jesuit educational house, Lasalle -- in the 4,000 population community of Menzigen in the Canton Zug in central Swizterland -- looks like an Asian tea house.  The supper table is carelessly pushed aside.  In its place stands a small table for a tea ceremony.  There the priest sits cross legged and presents the New Rite of the Mass. The irony of fate:  the General Council of the SSPX is located in Menzigen.

Germany.  The traditional Instute of St. Philip Neri in Berlin is going to begin a house study for its far flung candidates.  The Institute reported this on its website.  The theological education will be called "Baronius-Akademie".  It will be a branch of study for priestly education, which will principally open to all.  The study direction falls upon Father Thomas Jatzkowski.  He is a former Prior of the Society of St. Pius X, who changed over to the Institute of St. Philip Neri in November of 2010.

Germany.  The Society of St. Pius X may not use any of churches in its pilgrimage to Altötting. Prelate Ludwig Limbrunner is the administrator of the pilgrimage locations responsible for the decision.  He already let the Society stand in the rain last year.  This year the Society will allow a priest to say his first Mass -- in a meadow.

Morocco.  Recently a ship with 1,600 homosexually touched wanted to weigh anchor in Morocco.  This was reported in the online edition of the magazine founded by a former National Socialist- Journalist, the boulevard magazine, 'Spiegel'.  Actually, the authorities refused the plague ship to land.  In Morocco, homosexuality is a crime punihable with six months to three years in jail.

Austria.  The homosexual disorder is not the worst of all sins.  This thesis was suggested by Salzburg Auxiliary Bishop Andreas Laun on Wednesday in the commerce site 'kath.net' in a guest article.  Msgr Laun told a tale of true homosexual sex offenders.  He values the "sins of homosexual people, who, all in all, go along with love for each other" not as bad as "the sins of people who exploit those in the third world, the sins of sex offenders and many, many other crimes."

Oh the graces for the Society and that new priest! What wonderful opportunities for grace are presented by these Modernist devils in The Church. It is a fearful thing to fall into the hands of the living God. Condemnations like burning coals are upon their heads because there IS NO CHARITY IN THEM, but for the SSPX and their priests and laity who are persecuted by them there will be great rewards in Heaven!

Remember, "Prelate Ludwig Limbrunner": It is a fearful thing to fall into the hands of the living God.