Yet again there is another Old Liberal Bishop of the rundown Post-Conciliar Church --- named by Benedict XVI -- who has been removed. 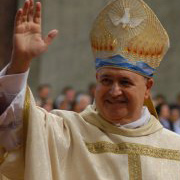 The reason for the resignation is not known.

Msgr De Mauro was the Secretary of the Vatican Prefecture for Economic Affairs.

His dismissal after only three years in an unimportant Italian diocese was widely interpreted as a demotion.

The Italian news agency 'agi.it' spoke of the dissmissal of the Archbishop.

Msgr Di Mauro was ordained a priest by the Old Liberal Archbishop of Milan, Giovanni Cardinal Colombo (+1992) in June of 1976.

Along with theology, he studied Literature, Journalism and Economics.

He was active in the Archdiocese of Milan as a chaplain in various parishes.

From 1994-1998 he worked for the first time in the Vatican with the Papal Office of Laity.

Then he came back as a pastor from Milan.

In January 2004 he was named as a Delegate to the Ordinary Section of the "Administration of the Patrimony of the Holy See".

In September 2007 the Pope raised him to Secretary of the Prefecture for the Economic Affairs of the Holy See.

For this administrative post, Benedict XVI consecrated him Bishop on the 29th of September.

On the 22nd of November 2010 Msgr Di Mauro was surprised to be named as Coadjutor-Bishop of the small Diocese Vigevano -- 35 km south west of Milan.

As a consolation prize, he was granted the personal title of Archbishop by the Pope.

There are two possible reason for the resignation of the Archbishop: one -- a possible -- entanglement in the disappearance of documents from the Vatican or -- more likely -- sexual indiscretions.