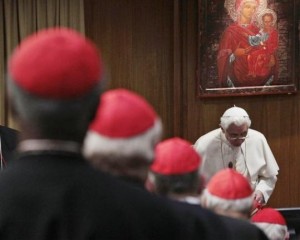 Melloni: Vatileaks were intended as an attack on the Pope

“I don’t think there is anything new here. The problem is, who is pouring fuel on the fire and who is fanning the flames? They certainly cannot attribute this to their right to freedom of expression....” This is how Alberto Melloni Professor of History at the University of Modena, Italy and director of the John XXIII Foundation for Religious Sciences in Bologna summarised the Vatileaks case that has been causing so much mayhem in the Holy See. Here, the hunt is on for the moles who stole number of documents, notes and letters, sending them to Italian journalist Gianluigi Nuzzi, author of “Sua Santità. Le carte segrete di Benedetto XVI” (His Holiness. Benedict XVI’s secret letters)

What do you make of the “Vatileaks” saga?

In my opinion it is an attack against the Pope by those who wish to tell him: you were wrong in your choice of Secretary of State and you were wrong not to substitute him...”

Are there any previous cases that bear a comparison to this one?

“No, I don’t think so. I must say that the book does not reveal anything massively new; they are not “secret letters” at all, it’s just private internal correspondence: it is clear that the aim is to prove that there is no surveillance, that anything can get out and that the archives are not properly looked after.”


What can we expect now?

“Nothing I don’t think. In my opinion, this book represents the end of Vatileaks. I think that is all there is to the dossier, a document package containing some correspondence between the two parties was produced, correspondence that was of no particular importance at that...”


How can you say that the letters sent by Boffo to the Pope’s secretary are of not great importance?

“If one takes a closer look, it’s news that has already come out. The behind-the-scenes events of the Boffo case have dominated news stands for weeks. So has the tension surrounding the head of the Vatican Governorate, Archbishop Carlo Maria Viganò and his new promoveatur ut amoveatur in Washington. Angelo Scola’s opposition to the IOR’s rescue operation to save Saint Rafael also caused a stir. There are other examples also. The only real news is the message sent by the person who leaked the documents. This message was: you are not able to protect the Pope.”

What are the consequences of this?

“Whoever stole the documents has incurred a latae sententiae excommunication, the most serious of sentences, because their action was a personal threat to the Pope.”

There is a dispute regarding the right to free expression and to document confidentiality. In your opinion, does the Holy See have legal foothold to proceed as announced in the communiqué issued in recent days?

“I would like to remind you that the Pope’s correspondence is concordatory material the Italian Concordat of 1929 is meant to guarantee confidentiality. As such, I think there are legal footholds to proceed and even to request the collaboration of the Italian authorities.”

So what is the situation with regards to the right to freedom of expression?

“I don’t think it is possible to speak of a right to freedom of expression, there was no journalistic inquiry; a document package was sent and subsequently published. This material is to do with the Holy See’s internal activities: a person stealing the documents is one thing, diffusing these for the person that stole them is quite another.”

Who cares about the Vatileaks? None of it makes sense because it's been drummed up to satisfy those with itching ears. Leaked documents are in no way going to destroy or even weaken the papacy.

They are being used to perpetuate the manged anti-Catholic sex-abuse campaign and are attempting to implicate the Pope in coverups.

I'm sure you're aware of the influence the media can wield in terms of public opinion.