This Sunday the SSPX Overwhelms the Holy City of Trier

Whoever can't begin with the middle-left pilgrimage motto "Fair sharing inistead of social division", is left behind with the Lefebvists. 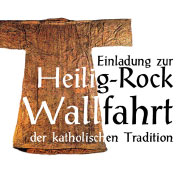 (kreuz.net) The preparations for the traditional Holy-Robe Pilgrimage to Trier is running at full speed.

The great even is being organized by the Saarbruck Priory of St. Mary of the Angels.

In addition there were 130 youth of the 'Catholic Youth Movement'.

They will conclude their German meeting on Saturday and Sunday in Trier and will take part in the Pilgrimage in any case.

The Church-haters Are Also Coming

The Society's German seminary in Zaitzkofen will come.

The schools in Schonenberg, Saarbrucken and Wangs in Switzerland have reported with  the largest number of participants.

For this Sunday, according to the current count, more than an additional 1,000 faithful are expected.  They are traveling by bus, train and private automobile.

Even the anti-Church media will report this great event.  The slanderous "Sudwestrundfunk' has promised to be there.

High Mass will be celebrated on Sunday at 9:30 am in the Church of the secularized Abbey of St. Maximin.

The church is being used today as sports hall for the (in name only) Catholic private school St. Maxim and for concerts.

At 12:30 the masses of Pilgrims will enter Trier Cathedral and venerate the Holy Robe.

The day of grace closes at 4pm with Vespers and Benediction of the Blessed Sacrament.

In the official program of the Old Liberal Holy Robe events there is not a word mentioned about the great Catholic Pilgrimage.

The motto over the Sunday's events reads:  "Today especially: everyone is invited and welcome!"

It remains to be seen if that's the case.

The official pilgrimage web site informs us that the members from native language communities and from the pastoral concern of the police will set a "special accent".

The 'Catholic Employees Movement' will pilgrimage in the shadows of the pilgrimage to Trier with  a some very  pointed political propaganda "Fair share instead of social divisions".

Otherwise, the Old Liberal Diocese of Osnabruck and Munster are present.

The Dress of a Concentration Camp Survivor

Among the numerous little events there is this example:  '>>Rock Bottom<< of the dress of a Concentration Camp Survivor'.

It has been organized by the 'Catholic Youth Study Group'.

Otherwise there is the immaturely inspired event "Way of Mature Faith".