The Vaticanleak Book is a Hastily Built, Chaotic and Untrammeled Thing

It is to laugh:  As the Church-hate media use Bishop Richard Williamson as a pretext to get started on the Pope, he expects backing from the German Judas-Bishops. -kreuz.net 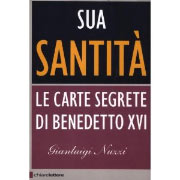 (kreuz.net, Vatican)  The book from Italian journalist Gianluigi Nuzzi, armed with books from the 'Vatican Leaks', is a hastily knit messy framework.

This was established by the German news "Welt" yesterday.

It was published two weeks ago.

Nuzzis' book cites hundreds of secret documents or memos and handwritten notes from the Pope.

The facsimile of thirty confidential letters are in the appendix at the end.

Many of the  papers are confidential letters concerned only with Italian affairs -- "a dinner between the Pope and the President of Italy, also the dismissal of the chief editor of 'Avvenire', the newspaper of the Italian bishops' conference,"  says the newspaper.

At dinner with the ex-Communist and Italian President Giorgio Napolitano they discussed family law, euthanasia, abortion and children.

There is only one note about the Italian president on the Vatican document, "Only married civilly."

Another letter comes from the emeritus Cardinal Paolo Sardi (76) -- the Pro-Patron of the Order of Malta.

He criticized the poor coordination of the various departments in the Vatican.

A letter of the Papal delegate to the beleaguered congregation of the Legionaries of Christ, Cardinal Velasio De Paolis (76) reported on the massive donation slump of the order and their severe financial situation.

A protest against the Pope insultress

A memo to the German Nuncio, Archbishop Jean-Claude Perisset, asked for "a clear word of protest" directed at the Bundeschancellor Angela Merkel.

This statement refers to her interference in the lifting of the Excommunications against the four Bishops of the Society of St. Pius X in 2009.

The chapter on the German Chancellor contained seven pages.

Benedict XVI noted himself in his report the word "media tsunami".

In Nuzzis' book, there were also conflicts specified  between the Old Liberal Mainz Cardinal Karl Lehmann and the Pope.

But there's even more -- at 'Weltbild'

In an interview with the German 'Tageschau' Nuzzi said that onoly some documents in his book come from the Pope himself.

During the media scandal regarding Bishop Richard Williamson the Pope personally criticized to the German Nuncio that the German Judas-Bishops did not defend him. [Remember when Father Schmidberger of the SSPX did just that?]

Nuzzi explained still more that there were still more documents regarding "Weltbild" [The pornography distributor of the German Bishops].

This information could be included in a planned German version of the work.
Posted by Tancred at 1:43 PM

The heretics and enemies of the Church who have infiltrated the episcopacy in order to sabotage the Church from within are revealing themselves. These people, who have done so much harm since the disaster known as "Vatican II" are beneath contempt.

For the life and soul of me I cannot begin to comprehend why the 'faithful' get upset with things like this. Truth sets free, said Jesus.

If there is truth to any of these matters, as is the case with the abuse and cover up crisis, (personal experience of both) - there can be no harm done to the 'Church'. Only good. Thanks be to Gott in Himmel for the media.

Jesus also said that the 'gates of hell will not prevail'. The media are not the gate keepers of hell.

It is the rot and corruption, the 'filth' within the Church itself - hierarchy that is the real danger. We should be thanking the press. Might be an idea. Shock them into silence too :-)

And it's not all because of VatII. It's always been there. Only the blind, liars and fools say otherwise.

Now, give over. Moan, lament less and pray more.

Oh, and make a good confession.

Catholics ripping the guts out of each other hardly sends a good message to the world.

The Vatican preaches transparency BUT practices secrecy. Archbishop Vigano exposed corruption in Vatican financial affairs. He was "exiled" to the United Staes. He begged Pope Benedict to let him stay and help clean up the evil.
The Pope's butler should not be condemned but commended for bringing darkness into light.

The Pope's butler deserves to be condemned for violating confidence and committing a criminal act as does the party(s) to which he's affiliated.

Every government and church organization has a certain level of secrecy.

Should the psychological or medical professions be required to publish the files of its patients?

Should businesses be compelled to broadcast their business plans?

Likewise, I'm sure we'll never know exactly why +Vigano was sent to the US, but it may have something to do with this Liberal associations in Cardinal Sodano's clique.

Perhaps it has something to do with the fact that there are parties in the Catholic Church, as is well documented, who aren't as concerned with being faithful as they ought?