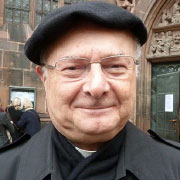 Germany. With the Motu Prorio 'Summorum Pontificum' the Pope wants to show that he is doing "everything possible in order to avoid a definite schism." The Old Liberal Bishop Archbishop Robert Zollitsch said this in an interview with the newspaper 'Welt'. He fears that the reconciliation aims "God have mercy" will not be reached: "Point is that the interest in the Old Mass is much, much smaller in the Church than it looks like from the discussion."

A form of lifestyle?

Germany. Homosexual soldiers "should stand by their convictions as much as possible". That's what neo-conservative Bishop Franz-Josef Overbeck of Essen recently told a soldiers' pilgrimage to Lourdes. One must be careful "not to be formed by public opinion" -- he cryptically explained. This is valid not only for "this form of lifeestyle, but for others as well."

I would say that interest in Cardinal Zollitsch is even smaller.

He is NOT a cardinal, Deo gratias.

That's not my job.

Zollitsch isn't a Cardinal, he is just a Bishop. Also, i believe he is 73, close to retiring.

Will the Pope replace the liberal garbage bishops with good traditional Catholic men? Probably not.

Rather than rad liberals, the new bishops will probably be wimpish John Paul II style "moderates".
After all, Pope Benedict XVI must keep the spirit of John Paul II alive, mustn't he? That seems to be his only job!