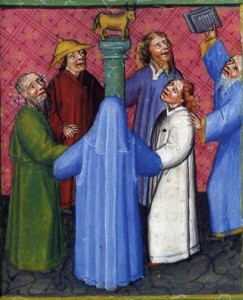 (Rome)  In the Italian Lindau Verlag (Turin) the outspoken book on current developments in the Church "The Empty Dance Around the Golden Calf" with the subtitle "Secularized Liturgy and the Law" has appeared.  The 144 page book has been written by the famous Liturgist Don Nicola Bux and the Canon Lawyer Raffaele Coppola, and is concerned with the liturgical questions and legal questions about the Liturgy.   The introduction comes from Raymond Leo Cardinal Burke, the Prefect of the Apostolic Signatura, to further contributions by experts, who will participate in a seminar at the Juristic Faculty of the University of Bari.

Whoever reads this book will understand why there is need for a clear and significant seriousness in the area of liturgy.  A necessity, which arises from the Ius divinum (Divine Law) in order to restore the correct relationship between God and his creation inclusive of men, in the only part of earthly creation, which he has formed in His image.  Cardinal Burke then recalled that the Lord spoke of the Law:

Do not think that I am come to destroy the law, or the prophets. I am not come to destroy, but to fulfill.  For amen I say unto you, till heaven and earth pass, one jot, or one tittle shall not pass of the law, till all be fulfilled. He therefore that shall break one of these least commandments, and shall so teach men, shall be called the least in the kingdom of heaven. But he that shall do and teach, he shall be called great in the kingdom of heaven

The word of God declared the fundamental purpose of the law, to honor and to keep the divine law
and to honor and keep each commandment which God has imposed on the universe.

"All of the provisions aim to the correct relationship on which the salvation of the world depends and so it is God's ordering and it is not to be regarded as an invention of man.  After the fall man corrupted the divine law for human purposes",  says Cardinal Burke.  The latter is certainly the case of functionalism, with with which modern philosophy is saturated, as earlier, then Cardinal Ratzinger once noted.  It is so saturated with this that they have reduced the faith itself and even the divine cultus of the Sacraments to a "function".

Unity, truth, the good, beauty and justice are completely inseparable aspects of the holy reality and the Liturgy.   In this book of collected articles the problems and solutions, in part from a specifically technical view, is shown in order to rediscover the true and immediate nature of the holy cult, which is a direct application of the divine law. The Liturgy is the cult related to God, which is ordered  by the regulations of the Church congruent through the divine law and ordered with art and music.  An extraordinary resource, which teaches the liturgical, artistic, architectonic provisions and  contains the sacral vestments and objects, is the Rationale Diviniorum Officiorum publiced in the middle ages by Bishop Guillaume Durand (1230-1296) in the south of France, which was the standard work for the study of the Liturgy in use until the 17th century.


St. Charles Borromeo used the same method for his Instuctiones fabricae et supplettillis ecclesiasticae (1577), which appeared only 15 years after the Professio fidei tridentiae (1564) and an exemplar of a great number of similar documents which the Bishops of all of Europe were issued for their Diocese.

It is striking that this legal, liturgical and architectonic unity doesn't exist any longer today.  One asks oneself for that reason "if the collapse of the Liturgy and associated arts and previously still the Liturgy itself,  is not a part of the consequence of the separation of knowledge".

In the volume "The Empty Dance Around the Golden Calf" the teaching of the ecclesiastical tradition will be collected and represented, under that Council of Trent and the Catechism of Pope St. Pius X.  The volume combines principles, forms and uses, which repair that nominal order, where the liturgical subjectivism of the post-Conciliar times were spread with its abuses and serious errors among the clergy and the faithful, in which it developed into a cult which was no longer directed to the Lord, rather to dance about a "Gold Calf" or to express it another way, which is directed to man, who celebrates himself.