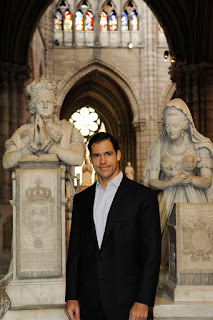 Edit:  nothing is more maddening to the republican and nominalist mindset than the idea of hereditary sovereignty.  Similarities analogies can be drawn between the libertine confronted  by moral theology, or an Anabaptist or Anarchist confronted with a beautiful stone edifice.

The crown prince is 38 today. Here's the google of the original French with some editing:

The prince was born April 25, 1974 in Madrid. He is the youngest son of Prince Alfonso, Duke of Cadiz (d. 1989) and The Duchess, born María del Carmen Martínez-Bordiú. He was titrated at birth Duke of Touraine.

He is the eldest of the Capetians and the legitimate successor of the kings of France. As head of the House of Bourbon, he is a direct descendant of Henry IV, king of the first branch of the Bourbons.Ten generations connect it directly to Louis XIV.

November 6, 2004, Prince married Maria Margarita Vargas Santaella. From their union were born Princess Eugenie, March 5, 2007, and May 28, 2010, the Princes Louis, Duke of Burgundy, and his younger brother, Alfonso, Duke of Berry.

Link to Institute Duke of Anjou....