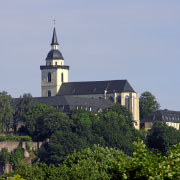 Edit: bargain hunters (locusts) swarmed the monastery, took everything and left a pittance behind.  Consecrated items may NOT be sold, so the monk in charge allowed the throng to take what they wanted in return for a good-will offering... what ensued was a disgrace.


Clearance sale in the moribund Benedictine Monastery of Siegburg: The bargain hunters have nearly broken down the doors.

(kreuz.net) About 700 interested -- above all flee market sellers and other salesmen from alll of the North Rhein - Westphalia area stormed the Abbey flee market in Siegburg on Sunday afternoon on the 15th of April.

This was according to the online edition of Bonn's 'General-Anzeiger'.

Thus, the doors were opened a half-hour earlier.

The rush was so largeg, that visitors had to be rejected.

705  objects were up for sale -- from spoons to religious oil paintings.  In less than ten minutes, everything was gone.

300 crucifixes were dragged away in crates.  A loud argument broke out around a single picture.

The 'General-Anzeiger'  spoke of a "carless pushing and shoving".

Someone tore a crucifix from the hand of an eight year old boy.

Covers from the tables were torn off, which weren't even set up for sale.

Everything for a donation


The event didn't quite follow the prescriptions of canon law.

This reads that religious objects, which are not to be used any longer are either destroyed or must be given for private use.

A sale of objects is not allowed.  For that reason, a donation is asked.

4067 Euro all together came from that.  They should flow into the retirement fund of the former Siegburger monks.


The flee market was directed by Brother Linus (27).  He has the task of liquidating the Abbey.

His commentary:  "People came around like at a closeout sale at the Galeria Mall."

After this experience, Brother Linus wants to organize the book market planned for June "completely differently".