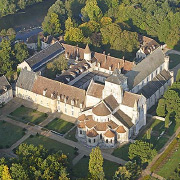 As Pope Bendict XVI. saw the new Abbot and his predecessor a few months ago, he shouted out: "Fontgambault!"

The Traditional Benedictine Abbey of Fontambault is located by a 270 population village of the same name in the Departement of Indre in central France.

It has a stormy development behind it.

With the Old Faith, it Survived the Conciliar Collapse

In 1948, 22 monks from the Abbey of Solesmes setted from Fontgambault.

Today with over a hundred monks it is one of the largest cloisters of the Congregation.  Since 1971 -- in the midst of the Conciliar night -- the cloister formed four new foundations.

On October 7th the new director of the cloister, Abbot Jean Pateau was consecrated.

Meeting with the Pope

On the 9th of March the website 'riposte-catholique.fr' reported some recent events at the cloister.

The webiste reported that the new Abbot and his predecessor, Abbot Antoine Forgeot, had travelled to Rome on November 23rd.

They were even invited by Pope Benedict XVI.  The meeting was not known about until today.

As soon as the Holy Father saw the two monks, he called out:  "Fontgambaul!"

The Pope enjoined the new Abbot, to hold fast to the line of his predecessors.

He had militated very strenuously against introducing any kind of concelebration.

Falling Back From the High Level

According to reports from 'riposte-catholique.fr' vocations are also not falling back.

In the last year they haven't had any entrants.


Recently there were five monks in the Novitiate.

Last August two monks had made their simple and another monk made his solemn vows.

Presently, the Cloister is expecting numerous new entrants in the near future.

Do the monks at Fontgombault us the Missal of 1962?

Sorry CTG, I thought I'd replied to you earlier and my response has disappeared.

They do indeed, have a 62 Missal there.