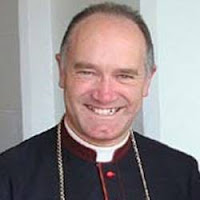 Edit:  Vaticanista Tornielli has reported on the "Lefebrians" in his blog Vatican Insider.  There have also  been comments around and about that people are "hoping the SSPX is respectful and doesn't lecture Rome."

Apparently, those people haven't been paying attention to what Bishop Fellay has been saying throughout the entire process.   He hasn't been disrespectful, nor has he put himself in a position of lecturing Rome.  He's actually imploring the Holy Father's patience and asking him to consider first the state of the Church, which is disastrous, before he considers the SSPX's concerns with regard to Vatican II and present situation.

He's far more genuine and respectful, Catholic and submissive to the Holy Father than most of the Bishops in the German speaking zone, of whom only a handful can really be counted as loyal.

Remember, Bishop Fellay didn't sound "disrespectful" in the least when he hoped that the Vatican would reconsider the Preamble.  Well, it seems that his approach has worked, for now.

Msgr Fellay still has great hope that Rome will reconsider.
At the same time he recognizes the magnitude of the collapse.
As an example he described a congregation of sisters, which was once widespread in France.
In the meantime the community has three nuns between the ages of thirty and forty years of age, and in the ages of forty and fifty another three sisters.
About two hundred sisters are over seventy years old.  In the age group between twenty and fifty the number is only one less than in the age group over 100.

Msgr. Fellay's conclusion:  "The Church is laying in death.  She is disappearing.  She has to wake up."

I "used" to be a big SSPX supporter, but ever since the Church has reached out (bending over backwards) to the SSPX, all I ever read is how arrogant the SSPXers are.

They will go the way of the Old Catholic Church (split after Vatican I) in which they now ordain lesbians to the "priesthood". Once orthodox and now a joke.

If the SSPX doesn't reconcile with St. Peter, let them dissolve into the ash-heap of history because the Gates of Hell shall never prevail over the Church.

Where do you read it? I see no evidence of this in Bishop Fellay's response to the Vatican. He's far more respectful than most of the Episcopal College. I see no arrogance, just spiritual agony.

What kind of nonsense are you writing Tito?

First, the Old Catholics were never Orthodox as they rejected papal infallibility, unless you're saying you accept Vatican 2 and its all innovations?

Second, the SSPX does not have to 'reconcile' with Rome, it could be normalised and Rome has to reconcile with itself i.e its own tradition

Third, indeed the gates of hell shall never prevail against the church but that has nothing to do with the issue at hand.

If all you ever read is how 'arrogant' the SSPX is, then maybe you're reading the wrong blogs, i.e. neo-Cats and 'aesthetic' traditionalists...

Just because an offer is made, they don't have to blindly accept anything. Bp Fellay is afraid they'll lose their ability to speak out on the evils in the Church today. He'd happily accept something if he knew that wouldn't happen. He doesn't want him or his successor to go the way of poor Bp. Rifan. I'm "still" a big SSPX supporter.

Based on the differences in homilies one generally hears between official Diocese Liturgies and the SSPX, I'd say there's some legitimate cause for concern.

+Fellay still remembers Protocol 1411 too and people have paid close attention to the vile way the FSSP, ICK and other traditional orders have been treated by the administration of the Church.

i think tito is smokin dope.