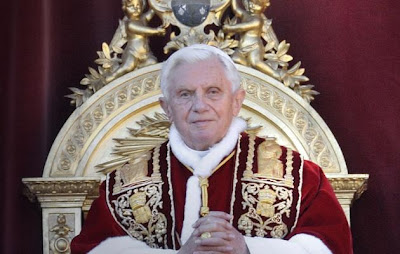 Pope Benedict XVI delivers the Urbi et Orbi (to the city and to the world) Christmas Day message from the central balcony of St. Peter's Basilica in Vatican City, on December 25, 2011. In his traditional Christmas Day message, Pope Benedict XVI urged the faithful to seek a "spiritual union" with the less fortunate around the world. UPI/Stefano Spaziani


VATICAN CITY, Jan. 27 (UPI) -- Pope Benedict XVI said Friday at the Vatican the world faces a crisis of faith and warned against indifference to doctrine in the name of religious unity. "Today we see a number of good results caused by ecumenical dialogue, but we must also recognize that the risk of a false Irenism and indifference, quite alien to the mind of Vatican II, demands our vigilance," the spiritual leader of the world's Roman Catholics said Friday at a meeting of the Congregation for the Doctrine of the Faith. Irenism was an ideology conceived by Dutch theologian Erasmus that sought to mediate differences between Protestants and Catholics, the Italian news agency ANSA said.

Edit: A few may remember the words of Dietrich Hildebrand on False Irenicism.  It's clear that the Holy Father does.

"False irenicism is motivated by a misconceived charity at the service of a meaningless unity. It places unity above truth. Having severed the essential link between charity and defense of the truth, irenicism is more concerned with reaching a unity with all men than with leading them to Christ and His eternal truth. It ignores the fact that real unity can be reached only in truth. Our Lord’s prayer ‘that they may be one’ implies being one in Him and must not be separated from His words in John: ‘And other sheep I have that are not of this fold. Them also I must bring and they shall hear my voice. And there shall be one fold and one shepherd.’"

"On January 27, Pope Benedict XVI addressed this plenary session discussing Tradition, ecumenism, and Vatican II. Although the address said some good things (including condemnations of irenicism and indifferentism), a few statements are enough to give Traditionalists some pause. First, the Pope states, “We can see today not few good fruits born of the ecumenical dialogues..." The obvious Traditional response to this statement is to ask: “Such as?” The Pope fails to mention any specifically in his address. Since the only legitimate fruit of any ecumenical discussion is the conversion of non-Catholics to Catholicism, where is the evidence that this been brought about through ecumenism?"

I think people are too eager to condemn ecumenism because it's been associated with false ecumenism.

Ecumenism gave us the Council of Ferrara-Florence and the reunion of the Orthodox and Catholic Churches. Ecumenical dialogue also took place at the Council of Trent between Protestants and Catholics. There's nothing newfangled about it at all. It is a condition of attempting to bring together broken parts of the Church on the part of its Bishops. I see nothing problematic about this.

I would just like to see the stats as to how many more convert Catholics who practice the Faith there are now 50 years after the Council as to how many converts there were 50 years before the council.

I believe Cruise is correct in asking that we be shown these fruits. They are few and far between.

Of course what a liberal mindset means by "ecumenism" and what Catholics like Tancred and Cruise, above, mean by it are two different things entirely. Proper ecumenism is the effort to convert Jews, Heretics, pagans and schismatics to the one true, Church. Liberal ecumenism is the watering down of Catholic doctrine to make it more acceptable to non-Catholics. These two views are complete opposites.

While I concur with friend Tancred that the proper ecumenism of the past was undoubtedly a good thing, I must also agree with Cruise that the liberal variety is a disaster.

Sadly, whenever Rome speaks of ecumenism today we have to be well on our guard.

Clearly, false irenicism is a failure, it was intended to be a failure and undermine the authority of the Church, but true ecumenism is another thing.

The ecumenical dialogue during the Council of Lyons are extremely revealing about the mindset of Orthodox and Catholic prelates, and how eager each was to make "compromises". They were willing to compromise about disciplinary things like beards vs. being clean shaven, the azyma [the leavened or unleavened Host] as well as more essential doctrines like the filioque.

I look at Cardinal Bessarion as one of the fruits of the dialogue, and he was even elected Pope, for his efforts to secure military action against the Turks and restore the Empire to Constantinople. [Which failed, but he did managed to save thousands of books and hosted a lively intellectual circle.]