Bonn, Germany: Violence Against the Mother of God 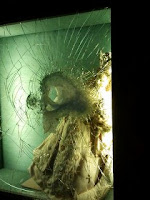 Germany: Unknown persons have damaged a Marian Statue in the Rüngsdorfer Chapel. This was reported in Bonn's 'General-Anzeiger' on January 20th. Rüngsdorf is a municipality with 7.000 population in the city zone of Bad Godesberg in Bonn. Dean Wolfgang Picken is convinced of "intentional and religiously motivated vandalism". Nothing as stolen "The perpetrators had clearly intended to defile the place and damage the Madonna.", Explained the Dean. It is the fifth such attack against the Mother of God in five years. Image from Blickpunkt.
Posted by Tancred at 8:16 AM

Hail Mary full of grace the lord is with thee, blessed art thou among women and blessed is the fruit of thy womb, Jesus. Holy Mary Mother of God pray for us sinners now and at the hour of our death.