It is a legend that hand communion goes back to the first century.  It comes much more from the devilish schismatic of Geneva, John Calvin. -kreuz.net

(kreuz.net) The current form of hand communion stems from the Calvinists. 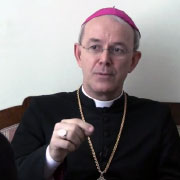 This is what Auxiliary Bishop Athanasius Schneider (50) of Astana in Kazakhstan said at the end of October for the videosite 'gloria.tv'.

"That was an abuse"

Calvinist self-communion was introduced in the 1960s by decadent Catholic Communities in the Netherlands.

This step happened in disobedience to ecclesiastical rules -- Msgr Schneider stressed:  "That was an abuse and the Holy See forbid it in the 1960s."

Finally Paul VI († 1978) addressed hand communion in the Document 'Memoriale Domini' in May 1969 with a "heavy heart":

"In this document the Church said that this form is an exception and that kneeling Communion would remain the rule."

At hand communion the people would take the Host with their fingers and put it in their mouths themselves:  "this particular gesture has never taken place in the history of the Church, never."

It was a kind of self communion.

The Lutherans adapted themselves to the Catholics

Msgr Schneider recalled the Episcopal Synod of October 2005 on the Eucharist.

During a recess Msgr Schneider asked an attending Norwegian Lutheran "Bishop" how his community gave  the Lord's Supper.

The Lutheran answered that the Norwegian State Church had, up until about ten years ago, been giving supper only kneeling and on the tongue. Yet the influence of decadent Roman Catholics has caused hand communion to be introduced.

The Auxiliary Bishop asks that hand communion be prayed and worked against:

"We must deeply desire that this form of current hand communion, which has never been practiced in the Church, be abolished"  -- he said with feeling.


Handcommunion is a minimal form of  reverence.  On the contrary, the Church ought never to be satisfied with minimalism.

Particles of Host on the floor

Msgr Schneider warned that giving hand communion will cause many particles to be lost.

The Hosts are often flaky.

The particles could also adhere to the fingers or remain on the
palm.  They would fall on the ground and be trampled.

In Kazakhstan, according to the Auxiliary Bishop, Communion is only given kneeling and on the tongue.

"It so often happens to me and also to other priests, that there are a few particles on the paten."

Without Communion patens, these particles would fall on the floor or in the clothing of the people.

Communion in the Hand is a Calivinist Innovation

-Lots of links and historical back ground

Not even Luther Would Have Done it

Link at Free Republic With Commentary


Bishop Follows Pope Benedict's Example: Communion Kneeling and on the Tongue Only

Communion in the Hand Destroys Piety

Other Blogs Linking In:

Email ThisBlogThis!Share to TwitterShare to FacebookShare to Pinterest
Labels: Communion in the Hand, Liturgical Abuses

This guy for our Next Pope, long live Pope Benedict XVI, but I absolutely love this Bishop...please Holy Father, give THIS guy a red hat.

When will modernist practices be abolished altogether? When can we jackhammer the modernist "altars"? I want the modernists to watch the buildings they have built be torn down! I want to rip their "art" off the walls and smash it with a sledgehammer! I want to burn the polyester "vestments"! Let's gather all the "Gather" and "Mass of creation" and have a barbecue! When can we restore the desecrated churches? I want Bishop Mathew Clark to see the cathedral he vandalised restored to its former glory.

Even with the USCCB "norms" of Communion standing and in the hand, when I forgot to remove the prie dieu after a week night Adoration and Benediction and left it where it was for all five weekend Masses the most interesting thing happened. People asked before each Mass if it would be ok to kneel at the prie dieu and receive on the tongue. I said, "Why of course you may!" You'd be amazed (not) at how many have chosen to receive the Blessed Sacrament in the traditional manner. I've never remembered to remove that prie dieu. I'm getting so absent-minded!

REMOVE Bsp. Dolan of NY. He is a scandal, nothing but a scandal.

I wish Bishop Schneider were pope!

I remember seeing a Swedish movie (a Bergman film) showing a Lutheran communion scene in which all the communicants knelt at a communion rail and received communion in their palm, BUT DID NOT TAKE IT WITH THEIR FINGERS; instead they leaned down and ate it out of their palm. JUST AS BISHOP SCHNEIDER HAS EXPLAINED HAPPENED IN THE EARLY CHURCH. As for receiving under both species, the PREFERRED WAY has been consistently instructed for the priest to take the Host from the ciborium someone else is holding (or on a stand next to him) and dip in into the Precious Blood in the chalice he is holding and place it on the tongue, with a server appropriately holding a paten. In each edition of the Missals that is what is recommended. IT IS NEVER DONE THAT WAY, BECAUSE THE CLERGY DON'T WANT TO DO IT. btw all the Eastern Churches do instinct and flip it into the open mouth.