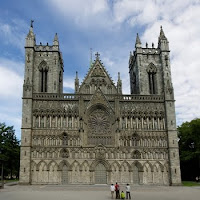 Edit: Norway is heavily dependent upon German Catholics for support. God help them. Why don't they just ask for the Cathedral the Lutheran Church in Norway stole? The Norwegians don't even really use it any more do they?

Trondheim (kathnews) As Ansgar-Werk reports the Bonifacius work in connection with the Northern Bishops Conference have recently proposed a new project for the new construction of a Catholic Cathedral in Trondheim. "The structural condition o fthe old Church is not safe and not able to be renovated, and the old church is too small for the growing community in Trondheim, so we've decided to build a new one," says the Apostolic Administrator of the Prelature and Oslo's Bishop, Bernt Eidsvig. The Bishops from Norway, Sweden, Iceland, Finnland and Denmark have met at the invitation of the Bonifatius work and the Archbishop Hans-Josef Becker in Paderborn.

Msgr Eidsvig would like the completion of the church in 2014 to commemorate the thousand year anniversary of the baptism of St. Olaf († 1030). From 1015 to 1028 Olav II Haraldsson became King of Norway, Rex Perpetuus Norvegiae. For the planned project, the costs are expected to be 9.5 Million Euros. "The Prelature of Trondheim with about 9.300 Catholics can not pay for the building of the Cathedral alone. They need help from Germany", clarified Msgr Georg Austen, general Secretary of the Bonifacius work, and assured his support. The Catholic Christians in the area of Trondheim make up about 1.3 percent of the population in an extreme diaspora.

In north European lands, the number of Catholics is estimated between 0,2 to 3 percent so that the costs for the building and the support of churches, chapels and community homes themselves can hardly be born. "Much which is existentially necessary for the Churches in our countries are necessary wouldn't be possible without help from Germany", stressed Stockholm's Bishop, Anders Arborelius. Arborelius is the president of the Northern Bishops Conference and Grand Prior of the Commandery of Sweden of the Knights of the Holy Sepulchre in Jerusalem.

In 2010 the Bonifacius work received a further 2.1 Million Euros from Catholics in Northern Europe. So that with German Help Works, this will support 13 building projects as well as projects for children and youth. Important projects are among other things the Newman Institute in Uppsala, Sweden, which was recognized as the first Catholic University in Sweden after the so-called Reformation, by the State and the building of a Contemplative Cloister in Trondheim-Tiller, Tauntra and Munkeby (Norwegen).