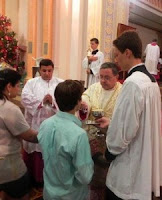 (Brasilia)  Bishop Msgr Antonio Keller, of German descent, head shepherd of the southern Brazilian Diocese  Frederico Westphalen is only giving Holy Communion since Christmas in his Cathedral church to those who are kneeling and on the tongue.  He is following the example of Pope Benedict XVI in this and is intending to support the "reform of the reform".

The internet site, Salvem a Liturgia has published Bishop Keller's pastoral letter about the reception of Communion.   The Bishop reminded the priests and faithful of his diocese that every recipient of Communion must have the grace in order to be able to receive the Body of Christ.  The Bishop underlined the fundamental difference between bread as normal sustenance and the Holy Eucharist, body, blood soul and divinity of the Lord to sustain the soul.

Bishop Keller also reminded on the duty, to fast at least one hour before receiving communion and called for the necessity of having the right disposition at the reception of Holy Eucharist.  In the pastoral letter, Msgr Keller informed his Diocese that he would be following the example of Pope Benedict XVI and giving Holy Communion to the faithful only while they are kneeling and on the tongue.

The words he directed to priests, were: "The refusal of Holy Communion to the faithful, because they want to receive it in a kneeling posture, would be a great injury to a fundantal rights of a Christian believer, namely the right to receive spiritual support from their pastors through the sacraments. (CCC Canon 213). Even where it is allowed to the congregation to properly receive Communion standing by the respective Bishops Conference, that the faithful, who wish to Communicate Holy Communion on their knees may not be refused that for that reason. (Congregation for Divine Worship and the Discipline of the Sacraments, written on 1. Juli 2002, Notitiae 2002, S. 582-585).

The Diocese of Frederico Westphalen was founded in 1961 by Pope John XXIII. and is the suffragan Diocese of the Archdiocese of Porto Allegre. The name of the city, in which the Bishop's See is located, comes from a German engineer. The population of the Diocese shows a strong German presence, which is apparent even from the family names of the recent Bishops. (Msgr. Hoffman 1962-1971, Msgr. Maldaner 1971-2001, Msgr. Hastenteufel 2001-2007, Msgr. Keller seit 2008).
Text: Giuseppe Nardi Bild: Salvem a Liturgia Translated from katholisches...
Posted by Tancred at 4:02 PM

Email ThisBlogThis!Share to TwitterShare to FacebookShare to Pinterest
Labels: Brazil, Discipline, Liturgy, Reform of the Reform

Will "Hand Communion" be abolished?

It was forbidden in the first place, so as far as I cant tell, it doesn't really have much of a leg, or a hand, to stand on.