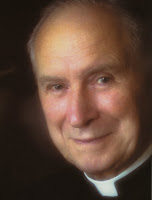 Edit: today is the birthday of Archbishop Lefebvre as well as the vigil of the great feast of St. Andrew the Apostle. It's fortuitous since both men were persecuted and suffered for the Faith. Here's the day's collect from a woman's Catholic spirituality blog:

Collect:We humbly implore your majesty, O Lord,
that, just as the blessed Apostle Andrew
was for your Church a preacher and pastor,
so he may be for us a constant intercessor before you.
Through our Lord Jesus Christ, your Son,
who lives and reigns with you in the unity of the Holy Spirit,
one God, for ever and ever. Amen+

Saint Andrew is the Patron Saint of Scotland and Russia. The reason for the saltire cross which is the national flag of Scotland, is the way in which the Saint was crucified during the persecution of Nero. The Catholic Encylopedia says:

Eusebius (Church History III.1), relying, apparently, upon Origen, assigns Scythia as his mission field: Andras de [eilechen] ten Skythian; while St. Gregory of Nazianzus (Oration 33) mentions Epirus; St. Jerome (Ep. ad Marcell.) Achaia; and Theodoret (on Ps. cxvi) Hellas. Probably these various accounts are correct, for Nicephorus (H.E. II:39), relying upon early writers, states that Andrew preached in Cappadocia, Galatia, and Bithynia, then in the land of the anthropophagi and the Scythian deserts, afterwards in Byzantium itself, where he appointed St. Stachys as its first bishop, and finally in Thrace, Macedonia, Thessaly, and Achaia. It is generally agreed that he was crucified by order of the Roman Governor, Aegeas or Aegeates, at Patrae in Achaia, and that he was bound, not nailed, to the cross, in order to prolong his sufferings. The cross on which he suffered is commonly held to have been the decussate cross, now known as St. Andrew's, though the evidence for this view seems to be no older than the fourteenth century. His martyrdom took place during the reign of Nero, on 30 November, A.D. 60); and both the Latin and Greek Churches keep 30 November as his feast.