Even though some of Hrdlicka's artwork was taken down, other pieces remain to this day in the St. Barbara Chapel. The Diocese made a half-hearted effort to correct the problem when it was in the public eye and then honored the cause of the problem with a funeral Mass. But that's the way Cardinal Schönborn rolls. 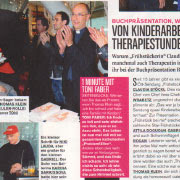 The hypocritical Viennese Cathedral Pastor consecrates things that should be condemned and damned. Because the powerful homosexual media saved his skin.

It produces herbal soda "Almdudler". This tastes like soapy water, which has been enriched with lemon juice and sugar.

Recently he accused himself -- apparently an advertising gimmick for his soap water -- of being homosexually disturbed in a 288 page book with the title "Zwischen Sein und Schein" [Between Being and Appearance].

Between the pages he described the typical life of homosexual decadence which swings between depression and longing for death.

The Austrian women's gossip magazine 'Seitenblicke' would not let this roast escape.

It peppered the story with a statement by the Vienna Cathedral Pastor, Fr. Anton Faber.

The publication wanted to know how he would consider this situation if "as a priest", a rich homosexual were to say: "I am gay and have a family with children."

The clergyman didn't have the courage, as expected, to opportunely or inopportunely declare the simple Catholic truth.

Instead of this, out flowed the usual clerical boot-licker type praise.

He thinks it's "grand and very honorable", that the Almdudler-Chief keeps to his homosexual neurosis -- tottled an enthused Father Faber.

If Gomorrists were to conceal their lives, then Father Faber would think that a "shame":

"I don't reject such hypocrisy, which cries to heaven" -- he piously explained. [He's just following in the footsteps of the Danube Cardinal, really, when the Cardinal said that it was better if homosexuals were in committed relationships than not.]

So, ummm, does this mean we give "religious submission of mind and will" to committed sodomitic relationships, as long as we live in the Archdiocese of Vienna?