November 15 is a Day for Heroes: Count Claus von Stauffenberg 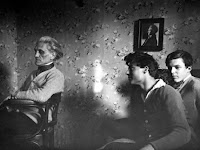 Edit: a hero was born in Germany on November 15 1907 at the Castle of Jettingen, who held the Empire and Secret Germany in his soul and lived up to its greatest champions.

Inspired by the poetic genius of Stefan George, he sat at the feet of the ancients and passed whole summers' days in antiquity, learning the timeless wisdom of the Psalmist, the Stagyrite, of Akademos. Then having learned those lessons, Count von Stauffenberg, the aristocrat and soldier, became the tragic hero who made the legendary heroes of old live again.

What might not be so well-known is that Count Claus von Stauffenberg, according to Cambridge historian Richard J Evans, “found moral guidance in a complex mixture of Catholic religious precepts, an aristocratic sense of honour, Ancient Greek ethics, and German Romantic poetry. Above all, perhaps, his sense of morality was formed under the influence of the poet Stefan George, whose ambition it was to revive a ‘Secret Germany’ that would sweep away the materialism of the Weimar Republic and restore German life to its true spirituality.”

The key to understanding that “Secret Germany” (as cryptically elaborated in a poem by the same title, which was written around 1910, but hermetically kept from the public until 1928) is the idea that only the poet with his charismatic authority can voice the arcane without revealing it. It is him being the “spiritus rector” who deepens the inner reflections of his disciples, who awakens their intellectual and spiritual sensitivity, so his word is followed by their action.

Link to ISN BLOG
Posted by Tancred at 9:14 AM

Stefan George is a dangerous model to emulate; teste his Secret Germany. It put the emphasis on the Nation, which emphasis led inexorably to the inability of the German hierarchy to resist the Nazi ideology. They were near hypnotized by Germanita - Deutschtum. Thus it became the GERMAN Catholic Church rather than the Catholic Church in Germany. The effects of this attitude - generally anti-papist - were strongly felt in Vatican II.
Currently the Church in Germany is near collapse. Consider Vienna. Consider the resistance of the German bishops to the news that they run a pornographic publishing house.

Nothing wrong with Secret Germany. It has more to do with the Hohenstauffens and the Hapsburgs than it does with the Lutheran Monarchy.