Degenerate and Blasphemous Art Continues to Appear with Your Tax Dollar 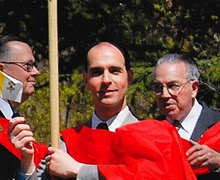 Edit: Apparently, the only group systematically protesting this is the TFP who sent out some e-mails about it.   But Bill Donahue has said something too.  It's still ongoing. Still, there's only one group I know of that does anything effective against this determined evil.

Check out the poll in the article below.  Most people who've voted feel Christianity is unfairly singled out by the Arts.

"Ants were crawling on the image of the crucified Christ," said Msgr. Kieran Harrington, a spokesman for the Catholic Diocese of Brooklyn, which sent a letter asking for the video to get yanked from the exhibit. "Certainly we don’t think this would be tolerated if this was the image of the Prophet Muhammed or any other religious symbol."

"A Fire in My Belly" is a short, unfinished film created by the late David Wojnarowicz. The Brooklyn Museum intends to show a four-minute edit of the video, which is about suffering.


Read more: http://www.nydailynews.com/new-york/unholy-controversy-brooklyn-museum-video-ants-skittering-crucified-jesus-enraging-christians-article-1.975449#ixzz1dJz6L6Gi
Posted by Tancred at 8:41 AM