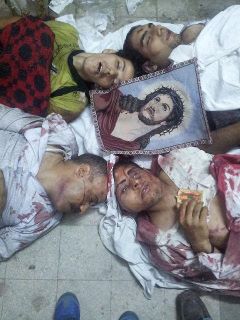 Edit:  the drivers of these vehicles look pretty determined to run people over.  There are thirty nine dead so far.

Remember when the secular media was excited about the so-called Arab Spring?

It shouldn't take an expert in Middle Eastern Affairs to know what happens in the wake of an Arab Revolt. The passions run high and so even the Army and the government can't resist joining in.

Here's an excerpt of an eyewitness narrative of the events so far.

The march from the Cairo district of Shubra was huge, like the numbers on 28 January. In the front row was a group of men in long white bibs, “martyr upon demand” written on their chests. A tiny old lady walked among them, waving a large wooden cross: “God protect you my children, God protect you.”

The march started down Shubra Street around 4 pm, past its muddle of old apartment buildings, beat up and sad but still graceful compared with the constructions from the Mubarak era next to them - brutish and unfinished-looking.

A man explained why there were bigger numbers than the march last week in response to the attack on the St. George’s Church in Aswan: the army had hit a priest while violently dispersing Coptic protesters in front of the Maspiro state TV building on Wednesday. A video posted online showed a young man being brutally assaulted by army soldiers and riot police.

The American reporters know almost nothing about the Islamic countries (some Israeli reporters excepted). There is absolutely no tradition of democracy in those countries.

For one think almost none of them speak or read Arabic. They have to depend upon suspect interpreters/translators, sucking up for a paycheck.

Talk of an Arab Spring (like in Czechoslovakia year ago) is just wishful thinking.

Military dictatorships or Islamic governments with limited democracy are the only options.

As bad as the Revolutionary Government of Mubarek was, this will be far worse.

Nasser should never have been allowed to abolish the monarchy by his people or by those outside.