Edit: now he has to go to Rome and spend more time on the telephone to manage the damage. Apparently there are people in Rome who give him the benefit of the doubt.

The Old Liberal Cardinal -- who is at the service of the pressure placed by anti-Catholic media bosses -- complained of the pressure "from at times aggressive websites, which can't be Catholic enough."

(kreuz.net, Wien)  It was a difficult, but beautiful time. 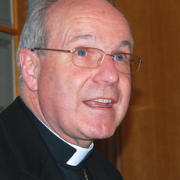 So said the unfortunate Viennese Cardinal Christoph von Schönborn for on an anti-Church broadcast "Orientierung" on Ex-Reichsender Vienna [former Nazi broadcaster] about his time as a Bishop.

He Praised Himself for His Abuse-cringing

As expected, it celebrated the abuse-hoax.

Cardinal von Schönborn did not make himself clear.  Instead, he praised himself because he jumped the hoops in 2010 for the media bosses.

His reward for the practice of  selling out the truth is that "words of appreciation come from throughout the world" -- he bluffed.

Whoever Responds to Pressure, Will Get More Pressure

Cardinal Schönborn spoke of a "pressure from all sides -- or all possible and impossible sides."

He admitted that there is a lot of pressure from classical Liberal pensioners in diapers.

The Cardinal covered up the fact that these are the useful idiots of the powerful media bosses.

He gets pressure also "from a part of the very aggressive websites, which just can't be Catholic enough."

That he spoke of websites in the plural shows the respect he has for the site 'kreuz.net' which he clearly meant.

The neo-Conservative commercial site 'kath.net' has sponsored the Cardinal for years and covered for him in its reportage on the Archdiocese of Vienna.

Cardinal Schönborn laments that the Catholics -- who've been marginalized by the Old Liberal Bishops for years -- turn to Rome and make their complaints known.

That happens on websites, personal mail or in face-to-face meetings -- explained the Old Liberal Prelate.

Actually he believes that the baby soft Romans are under control:  "That isn't anything to get too worked up about."

Because he smooths over the Roman side with his personal contacts:  "As people sit together -- you can talk to each other."

In the past, Austrian Bishops had neglected basic contact with the Romans.

What the Cardinal did not say:  Before 'kreuz.net' brought the endless scandals of the Old Liberal Bishops
to light, the Romans didn't even need to worry about duping anyone in Rome.

"it celebrated the abuse-hoax"
Do you actually believe that the priest sexual-abuse scandal was a hoax? The Holy Father certainly does not think it was a hoax, nor do the bishops in the United States and Ireland, just to name two countries so impacted. I can appreciate your 'traditional orthodoxy' but that is no license for absurdity.

A prodigal student of Joseph Ratzinger.

His Eminence, Cardinal Schönborn needs to get his act together. No doubt, he has a difficult situation to deal with, what with rebel priests, lay people who think they are popes, bizarre masses than can only be described as abominations. He's only made the liturgical and theological abuses worse by mollycoddling the heretics in his midst.

Any reasonable person could rightly conclude that Card. Schönborn has gone off the deep end.

Yes, I do think it's a manufactured crisis designed to manipulate public opinion.

The fact of the matter is that there are more pederasts in the entertainment industry, and no one seems to mind that.

No one seems to notice the irony of various political organizations promoting adults having sex with minors, either.

As true as those examples you sighted maybe and I have every reason to believe they are, the comparison limps in that the Catholic Church, rightfully so, maybe the last true guarantor of authentic Christian morality and ethics. The crimes committed by men ordained to serve "in personna Christi" is more than scandalous, they attack the very heart of the Church and people's faith. If their occurrence to say nothing of their gravity is ignored it will only serve to allow the 'disease' to metastasize.

80 percent of the extremely rare cases where sexual abuse occur are homosexual in nature and over half of the accusations are false according to the estimate cited in the article above.

Why should the Church be singled out for special malice and scorn while other branches of society are not?

Part of it is the Church's wealth and the other part of it has to do with power.

If they're going after the Church, they need to go after the mental health field as well as other denominations. Let us also not forget to mention the entertainment industry. There are a lot more pederasts per capita in entertainment than anywhere else.

Because the Church, as the Church bears a greater responsibility.

No, what you mean is that the Church should be judged by an unjust standard and suffer unequal treatment in the culture and the law for something it doesn't endorse in the first place.

If you want to see homosexuals campaigning for the legalization of sex with minors, all you have to do is go to any left-wing party in the Western world.

It's not the Church we should be worried about, actually, from the systemic charges that are usually leveled against it, but the Protestants, Godless Governments and Hollywood.

The people who are most guilty are setting the moral tone here, even maintaining a double standard, and people like you and many Bishops are willing to support it.

Also, in reference to your allegation that Pope Benedict and the Church at large are "concerned" about the abuse-hoax, it's not in the way you might think. I point out that the Church is finally starting to stand up to professional victims and their ACLU attorneys.

No, I am not advocating a double standard. The fact that the same occurs often with greater regularity is the secular world is without question. Yet, one can still acknowledge the double standard and believe that all of us in Church are called to act according to higher standards and as such when we fail to do so, the damage we can do and the scandal we can create casts it as a far serious affair than whatever Hollywood wants to do. Yes they have an influence, granted a very great influence, but if someone is "driven" from Hollywood, that is one thing, scandalized by the Church is another.

You're missing the point. The Church shouldn't be singled out for unfair treatment in this matter, and that's what is taking place, hence the term "abuse-hoax".

It is the manipulation of what Father Jenkins calls "moral panic" and was employed by the Nazis back in the day. The technique has been brushed off and put back into use in the last fifteen years to the benefit of groups like the ACLU and professional victims whose agendas are a lot more transparent than the news coverage would have you believe.