Antifa-Neonazis Mobilize Their Thugs Against Life

Left extremists are allowed to rule and operate how they like.  As a diversionary ploy the Joke-Republic hides behind the Nazi-craze.  [Meaning that it can use fascism in various ways to control people.] 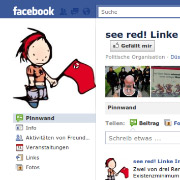 (kreuz.net)  The regional group of Dusseldorf's ‘Aktion Lebensrecht für Alle’ [Pro-Life for Everyone] was brought to silence by violent left-extremists last Saturday.

The pro-lifers planned a demonstration on Saturday evening, October 1st.

From the beginning of darkness till about midnight the film "Wunder des Lebens" was to play repeatedly. [here]

The ten minute cut shows the high-speed filming of the development of a person from conception to birth.

This gripping demonstration is an impressive witness against the criminal violence of abortion.

The Pro-Lifers didn't get to bring their plan to fruition.

Over a hundred antifa-Neonazis came to do malicious violence.  They tore the improvised video screen down and cut the power.

The left-stormtroopers shouted various insults over megaphones and speakers like, "Mary should have aborted, so we'd be spared from you", "My uterus belongs to me" and "No God, no state, no patriarchy".

By the time the riot police of the national and local police finally arrived, most of the chaotisists had disappeared.

The  urgently advised cancelling the demonstration.

The left-idiots were even in such a case looking for "reinforcements" and finally brought the situation to a point of escalation.

Why are the left shock troops tolerated?

The moral of the story: violent street thugs of the left are tolerated to operate and rule as they wish in Germany.

The millionaire media bosses -- who would otherwise be angry -- were silent.

The disruptive action was permited to proceed unhindered and was correspondingly effective.

To begin with, there were a few members of the Dusseldorf's Pro-Life organization facing about a hundred left street thugs in age from about twenty to thirty.

The left has some private storm brigades ready with which they cheapen the state by terrorizing the population  and the media.

The Antifa-Neonazis may be pleased with themselves

The Pro-Life event was advertised last week in the major media.

Already on the next day Dusseldorf's anti-constitutional initiative "see red!" alerted their thugs on a 'Facebook' page.

The Antifa-Neonazis were determined to impose their contemptible minority opinion against the value of children.

The 'Antifa-Socialist German Worker Party' must be pleased.

Email ThisBlogThis!Share to TwitterShare to FacebookShare to Pinterest
Labels: Anarchists