New York Times Continues Its Unholy Crusade Against the Church

Edit: You can't even arrest Roman Polanski and hold the French Government accountable while liberal European politicians are still promoting sex with minors. But perhaps the Catholic Church's time has come?

Human rights lawyers and victims of clergy sexual abuse filed a complaint on Tuesday urging the International Criminal Court in The Hague to investigate and prosecute Pope Benedict XVI and three top Vatican officials for crimes against humanity for what they described as abetting and covering up the rape and sexual assault of children by priests. 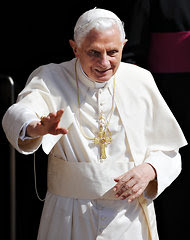 Pope Benedict XVI has been named in a court complaint.
The formal filing of nearly 80 pages by two American advocacy groups, the Center for Constitutional Rights and the Survivors Network of those Abused by Priests, was the most substantive effort yet to hold the pope and the Vatican accountable in an international court for sexual abuse by priests.
“The high-level officials of the Catholic church who failed to prevent and punish these criminal actions,” the complaint says, “have, to date, enjoyed absolute impunity.”
Posted by Tancred at 12:22 AM

Ironic combination of names there. Never realized it was my constitutional right to be tried by mob.