Edit: He's not the worst Cardinal in Germany, but he shouldn't be allowed to say things like this. Misrepresentation is almost a hobby with these people. 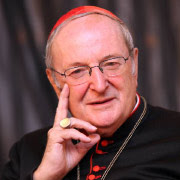 Heil Abuse-Hoax: Now the German Decadence Bishops have taken up the the theme, in which they give the opportunity to take a slimebath to everyone deserving or not.

(kreuz.net) Cardinal Joachim Meisner of Cologne is walzting in the dirt for the media bosses.


Excuse me? The Church is in a Glass House?

The Cardinal used an invitation by the media in Cologne for some cringing, creeping and groveling.

He described the last year of the media boss directed abuse-hoax, for these journalists, as an "Annus horribilis" -- horrible year -- for the Church.

The Church is now sitting in a glass house after the experience of this last horrible year --- maintains the Cardinal.


The Neo-Conservatives Have a Problem With Reality [Yes they do]

The sense of the Cardinal's words left him at a want for reality.

In an indescribable play of words on the abuse-hoax he complained to 'Domradio' that the Church "in view of the quest for truth sometimes held back by its own claims'.

For that reason its "for many in questionable positions, even the believability of our mission that has been battered."

Actually the real problem isn't with the abuse-hoax, rather it is with the neo-Conservative nomenclature, which Cologne's Chat Cardinal makes use.

This has compromised and water down Catholic reality for years with the invocation of the fatal Pastoral Council.

The goal of this thinning of reality is the laicization and phasing the Church into a society of decadence.

Hard Words are Only for the Defenders of the Truth


And furthermore, the Cardinal called the journalists present, not to be that, which the scope of their profession is -- namely "manipulators of the so-called public opinion."

In a fairly creepy way, the Cardinal looked the last defenders of Catholic truth in the face.

He first engaged in some flattery of the Pope. He is said to have taken "very much" on himself, in order to "bring home" the Priestly Society of St. Pius X.

Then he insisted -- in contradiction to what the Vatican actually said -- the qualification for the regularization of the Society:

If the Traditionalists "don't accept the Council, they must remain outside."

The battle lines are drawn.