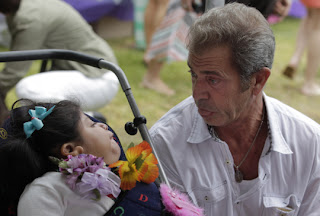 Editor: Mel has been very publicly shamed, but there is public reparation too and an example to be set by someone in his favorable, and often not so favorable, position.   While visiting twins he gets to tweak the consensus in two ways, while amending his life and setting an example:  In one way, he's demonstrating that these two beautiful and happy children with very challenging physical conditions can be full of joy and a powerful desire to live.  On the other hand, he's wearing the Miraculous Medal, whose image was entrusted to Saint Catherine Labouré and popularized in great part by Jewish convert  Marie-Alphonse Ratisbonne of Strasburg.
This is a tragedy turned to joy for human souls in the image of God expressing the ineffable mysteries of our mortality.  These courageous Guatemalan girls also bear striking names: Maria de Jesus and Maria Teresa. 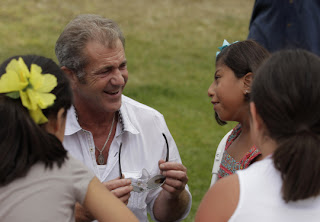 Mel Gibson checks on formerly conjoined twins
.
Play CBS News Video
(CBS News)  Guatemalan conjoined twins who were separated nine years ago turned 10 this past weekend.
The twins, Maria de Jesus and Maria Teresa, were connected at the skull, but were separated in 2002 at Ronald Reagan UCLA Medical Center in a painstaking 23-hour procedure that required untangling and disconnecting the babies' shared blood vessels.

The sisters returned home to Guatemala, but Maria Teresa contracted a devastating case of meningitis and the twins returned permanently to the United States for ongoing care.

Well worth reading this article, please share this information. With this article I had offered the opportunity to learn about it anyway I can say great article!

we are all sinners we need each other's prayers