The Emperor of Austria is Dead

Editor: He would have made a much better King of Spain than what we have now. The fate of the Kingdom of the Danube now rests in his successor, Karl's hands, Gott Rett Kaiser Karl. As he once said of his son, according to a British tabloid, "my son is Catholic enough, he knows what to do".

May His Highness, Apostolic and Imperial Emperor, rest in peace. 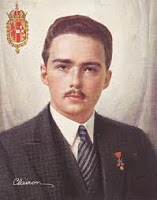 In 1961, Spanish dictator Francisco Franco offered to make him king of Spain after his own death. Habsburg declined, but [and] later praised the fascist leader for helping refugees, calling him a "dictator of the south American type ... not totalitarian like Hitler or Stalin."

BERLIN — Otto von Habsburg, the oldest son of Austria-Hungary's last emperor who saw the end of his family's centuries-long rule and emerged to become a champion of a Europe united by democracy, died Monday. He was 98.

Habsburg died in his sleep at his home in Poecking in southern Germany, where he had lived since the 1950s, with his seven children nearby, spokeswoman Eva Demmerle told The Associated Press.

Habsburg used his influence in a vain struggle to keep the Nazis from annexing Austria before World War II, then campaigned against the Soviet empire in the decades after the war.

Read here...
Remember when Otto Hapsburg physically confronted Ian Paisley at the EU, where Paisley insisted he was punched by His Highness.
A link to the Mad Monarchist with a beautiful painting, here.

And a fitting tribute by Theodore Harvey, here.
Posted by Tancred at 8:39 AM