Edit: will the genius of the mighty Yamoto People prevail? May Our Lady watch over them.

TOKYO — Northeastern Japan was jolted Sunday morning by a 7.0 magnitude aftershock, the largest to hit here in more than three months, triggering a tsunami warning for coastal areas trying to recover from the March 11 mega-disaster.

Initial reports indicated no damage as a result of this tremor, but residents — including workers at the stricken Fukushima Daiichi nuclear plant — were urged to evacuate. Tsunami waves between 10 and 20 centimeters high were reported in Miyagi and Iwate Prefecture.
Gallery 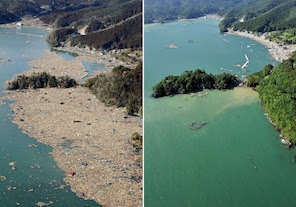 Japan: After the quake and three months after the quake: A comparative look at Japan’s topography.
More on this Story
The earthquake struck at 9:57 a.m., centered some 131 miles off the east coast of Sendai.