Editor: It wasn't so long ago that some people were saying, "hey, hey, hey, look at Pravda now". We remained skeptical with good reason. It wasn't just the weird ads, but the legacy of Pravda. Here, we have Pravda lamenting the fact that the West will continue to perceive Russia as "homophobic". Aww, that's too bad Pravda... 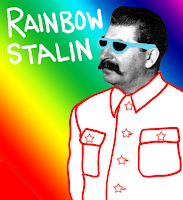 The Communist party used to be opposed to homosexuality, and Pravda's editorial desk probably is too, but they want to present a new, more democratic, kinder, cuddlier Soviet Bear.

[Pravda.ru] Just like before, the gay pride parade in Moscow was ruined. It goes without saying that the West will harshly condemn the "homophobic" Russia for violating the rights of homosexual individuals. There will be a share of truth in those accusations, albeit only a share. The rights of the LGBT community in Russia get violated indeed, but only when activists attempt to display their homosexuality publicly and provocatively. Let's just face it - holding the gay march near the Tomb of the Unknown Soldier is a challenge to the society.

Rainbow Stalin from, here.
Posted by Tancred at 9:31 PM