Editor: Vatican News Service has termites working in it. Asking Father McBrien about the Eucharist is like asking Ronald McDonald what he thinks of the healthfood. Catholic journalists who site him should be put under interdict, handed over to the secular arm, whipped and thrown into the dungeon.


Why can't Father McBrien find a  real job doing something else rather than the destructive and unhelpful job he's doing now as a "theologian". 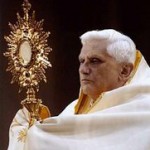 [VNS] At the same time, however, some theologians object to adoration as outdated and unnecessary, and warn that it can lead to misunderstandings and undo decades of progress in educating lay Catholics on the meaning of the sacrament.
Monsignor Kevin W. Irwin, dean of the School of Theology and Religious Studies at the Catholic University of America, said Eucharistic adoration by the laity originated in the 13th century as a substitute for receiving Communion at Mass.
At the same time, he said, the church often encouraged a believer's sense of "personal unworthiness" to receive the sacrament -- which Catholics believe to be the body of Christ -- so many resorted to so-called "ocular communion" instead.
Eucharistic adoration was also used as a teaching tool to reaffirm the doctrine of the "real presence" of Christ in the Eucharist, said the Rev. Richard P. McBrien, a noted theologian at the University of Notre Dame.
For instance, McBrien said, devotion grew during the 16th- and 17th-century Counter-Reformation, in response to the arguments of some Protestant Reformers that the Eucharist was merely a symbol, not the actual body of Christ.
In the days when priests celebrated Mass in Latin with minimal participation by the congregation, the hymns and prayers associated with adoration gave lay Catholics an opportunity for public worship, Irwin said.
Liturgical reforms after Vatican II greatly increased the laity's participation at Mass, which Irwin said satisfied the "felt need for participation in public prayer." Irwin called that an "underlying reason" for the practice's decline.

Richard McBrien...is he still running around? This terminally boring man has been insulting our intelligences for decades now. Actually, I thought he was dead.

Mr McBrien: on the off chance that you may be reading this, would you do me a favor? Just go away.