Editor: Don't forget to support the pious work of Chris Wells on his Pius Blog. He writes:

Saint Robert Bellarmine - De Ecclesia Militante
Today I'm beginning to post St. Robert Bellarmine's classic work, De Ecclesia Militante. Despite its importance to the study of ecclesiology, to the best of my knowledge there is no English version available. I will be posting a (very rough) English translation, with the Latin text following in a later post. I hope that by making this text available on the internet, it will prompt other students to rediscover Bellarmine's theology. 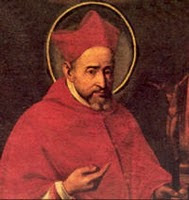 Chapter One
About the Name of the Church

(1) The controversy about the Church militant has many parts. For she is first considered as she is in herself; then about her members, that is, about clerics, about monks, about laity. But returning to the Church considered according to herself, about which we now start to dispute, there are esEpecially three controversies. The first is about the name and definition of ‘Church.’ The second, about the quality or about the visibility of the same. The third, about the notes, by which she is able to be known certainly.