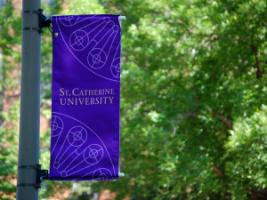 St. Paul, Minn. — A St. Catherine University study has found women are making little progress in winning seats on Minnesota corporate boards or moving into the executive suite.
The study found women hold only about 14 percent of the available seats on the boards of Minnesota's 100 biggest public companies. That's in line with the findings of the researchers' studies done in 2008 and 2009.
Professor Rebecca Hawthorne said CEOs have to do more to see that women advance up the corporate ladder

"CEOs have to do more to see that women advance up the corporate ladder."

Isn't the function of the CEO to create a firm with the best possible people in its key positions?

I guess I would expect that somebody writing for Minnesota Public Radio who employs nobody that ever built something (other than Bill Kling, who started it) would have that kind of attitude.

One of the reasons I stopped working for the DFL hit me square in the face about 1982. I was on my Senate District's Central Committee and we received a notice one day from the Hennepin County Central Committee. It seems that our delegation to a convention was not balanced.

There were too many women!

The quota system had been adopted. I quit and I'm sure they appointed a man to replace me.