Communion in the Hand Results in Sacrilege: "Moto Mass Switzerland"


One Communicant even tried to get seven Hosts.

The Conciliar Church has thrown Holy Communion to the dogs: Now they must live with it.

(kreuz.net) A motorcyle blessing with Holy Mass will take place on the Simplon-Pass on the 1st of May.

The Pass connects the south-west Swiss Canton Wallis with Italy.

According to a report from the Swiss newspaper 'Blick', the occasion of the Motorcycle Friends is "almost holy already".

It will be organized by the Moto-Club of Simplon and will have been taking place for its 25th occasion this year.

About 4500 bikers appear every year for the event.

In the past years there was a New Mass said by the Old Liberal homosexual ideologue, Pastor Charly Weissen.

Fr. Weissen likes to appear there as the top dog -- most of all in his bike gear.

He wears earrings and a handlebar mustache.

A natural consequence of Communion in the Hand

This is because the secular priest, Paul Martone of Brig, celebrated the divine service last year -- and was appalled.

At the news daily, 'Walliser Bote' he called the affair an "unworthy spectacle".

Why?: Many cyclists received the Host with a cigarette between their fingers.

There was also alcohol being consumed during the Eucharistic celebration.

One visitor tried to get seven Hosts.

From these sacrileges, Father Martone drew his own conclusions and wants to be saying only a liturgy of the word.

But NO, the Legend must Continue 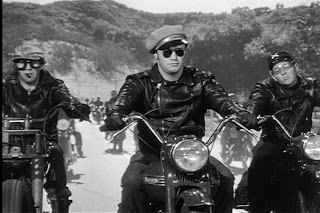 Actually, the Moto-Club Simplon has no such concern:

"For more than a thousand visitors the participation of a few people, don't rate to have themselves receive anything more than the highest Liturgy in the Church" -- said the club president appealingly for 'Blick'.

During the Service at Simplon, there's a 'disciplined quiet".

One request on the website of the Club made the point that over ninety percent of the members want a Mass.

For that reason the Club itself is seeking a willing priest.

He should be ready to give a simpl "Mass exhibition [sic]" on the Simplon.

The president will be heard to say, tellingly, that one is also desirous of a "supper".

thanks to paul for Wild One.
Posted by Tancred at 7:50 AM