Seminarians: Summorum Pontificum to extend to the Ambrosian Rite -- Call for the Old Rite 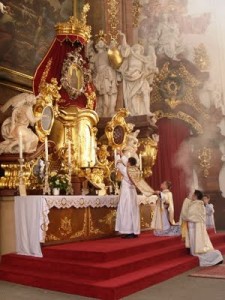 (Mailand)A group of seminarians of the ecclesiastical province of Milan have asked Pope Benedict to extend the Motu Prorprio Summorum Pontificum with the generous reinstatement of the Tridentine Rite as the extraordinary form of the Roman Rite, to the Ambrosian Rite as well.  This was reported by the Italian blog, Messa in latino.  The seminarians are asking that in the upcoming rules of implementation for the Motu Proprio that it be specifically mentioned that it is valid for all Latin Rites, and not just forthe Roman.  The Ambrosian Rite, like the Braga [once celebrated in Portugal] or the independent "old" Rites of the various religious orders, as they were celebrated up until the Liturgical reform.

The Ambrosian Rite, which dates from St. Ambrose (339-397), Bishop of Milan and some neighboring areas, as also in parts of the Diocese of Lugano in the Swiss Canton of Tessin.  The Archbishop of Milan is numerically the largest Diocese in the world.  Only some parishes of the Diocese celebrate in the Roman Rite.

The reigning Archbishop, Cardinal Dionigi Tettamanzi, has refused up until now the implementation of the Motu Propio Summorum Pontificum with the reason that the Ambrosian Rite isn't effected by it.

The same position  has been used by the Bishops of other Rites in the Latin Church,, like the Archdiocese of Braga in Portugal.

Because of this various internet blogs of Tradition have expressed the "concern" that the rules of implementation for the Motu Proprio will not bring the hoped for spread of the use of the extraordinary form of the Roman Rite.  Much worse, it will bring feared "limitations" .  For this reason the call "Request for the Holy Father, Pope Benedict XVI, [English] in the event of the Instruction/Clarification of the Motu Proprio Summorum Pontificum" has been called to life.  The text is in seven languages (English, German, French, Italian, Spanish, Portuguese und Dutch) and published on the internet for signatures.

Link to katholisches.info...
Posted by Tancred at 10:05 PM