Editor: Rorate Caeli had caught this Archbishop saying in 2008 that he was mystified about the reports of liturgical abuses in France, but as we can see from what Messa in Latino says:

The rites are defined by a noble simplicity ...(Sacrosanctum Concilium, 34): 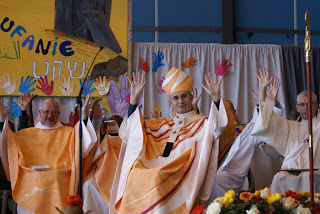 Archbishop Le Gall, archbishop of Toulouse, President of the Episcopal Commission for the liturgy and the sacramental ministry and a member of the Congregation for Divine Worship, during the celebration of a 'Day of Peoples'


Additional Information: In an interview with Le Monde of 5.7.2008,  Le Gall decried the "intolerable pressure" by those who are requesting the old Mass, and at the same time observed that it is essential to reintroduce the celebration according to the new missal [in a] "quieter, more reverential, more interior,  with more beauty to the liturgical vestments." C As shown in the photo above, is precisely what he is doing ...
Posted by Tancred at 7:55 PM