Fools' Masses All Over Germany for Carnival

In the past many modern parishes have so-called Fool Eucharists. Who can express it more clearly, that his own liturgy is a joke? 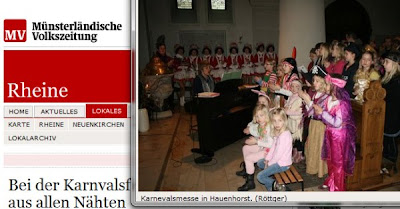 "The Fool's Mass began with the invitation of the pastor and his music ministers through the Lumpenchapel Burladingen. The Jester Choir, the fool's chapel, the children and the adults form the fool's guild for the festival in the fully occupied Church to make their own contribution. Paster Bueb [sic] has written his sermon in rhyme and has moved the faithful to complete the end of his sentences [...] At the end of the joyful service, the masks will be blessed."

From an article of the newspaper "Sudwest Presse' about a Fool-Sunday Mass in the Fideliskirche in the City of Burladingen in Baden-Württemberg.

What hasn't God given us?

"In the restlessly filled Church of the Assumption there wasn't the usual Sunday Mass. There were already Guggen musicians, cymbals and bells which will accompany the church service. The sermon by Pastor Stefan Möhler which was in rhyme was entertaining [...]. Fools in full uniform are welcome at Mass. 'It is a beautiful living picture. We're not bringing in foolishness into the Church, rather the joy that God has given to us;, said Möhler"

Disclaimer: The Savior will not stand by Fools

"The Vöhrenbacher fools experienced a happy start, as the home guild's cheerfulness invited the Proclamation of the Fool's Mass in the Parish Church. 'The Savior won't stick by the fool, rather the fool is, someone who God doesn't recognize', Pastor Martin Schäuble offered for consideration and was pleased at the full church pews."

From an article with the heading "Preaching with the Foolss Cap" from the Thursday regional paper 'Südkurier' about a Fool Mass in the City of Vöhrenbach in Baden-Württemberg.


Even a Fools' Mass

"Actually, on Saturday evening in the Catholic St. Stephanus Church in Bernhausen there are also numerous uncostumed churchgoers taking their place, but the fools were sigificantly in the majority. 'I'm delighted that the Church is so full it's ready to explode', said [Fr.] Andreas Marquart right at the beginning, and the word choice of the pastor indicated: It was not going to be a normal Mass. Rather a Fools' Mass even -- the third in the last six years. 'That has gradually, slowly become a tradition', said Sabine Paser of the Howler-Witch-Guild, who had organized the spectacle."

From an article in the Tuesday edition of the news 'Stuttgarter Nachrichten'.

"Where a few weeks ago the Advent cross dangled was hung a festive carnival cap. The symbol of the Christmas feast has vanished from the Galluskirche. In place of that is the train of fools. Accompanied by organ music come the actors of the Flörsheimer Carnival with their flag altar. All over the pews there are clowns, cowboys and Indians. 'We stand today as fools for God", groaned Pastor Frank-Peter Beuler to the costumed crowd, who were visiting the fourth Flörsheimer Carnival Mass."

From an article in the regional paper "Frankfurter Neue Presse" of February 1.

Fools Instead of Readings

"The Children were always involved with the celebration, as for example at the Kyrie and the intercessory prayers. Even at the 'Our Father' they were invited by the Pastor Hermann Otto who brought them to prayer with arm waving, in which the children joined with glee. The reading was omitted in place a princess entered, a clown, an indian, a pirate and a third level female spellcaster in front of the altar. A mother explained all of that, her life and the meaning of her costumes."


From an article in the 'Münsterländischen Volkszeitung' about the 'first great Carnival Mass" on Sunday morning in the Visitation Church in the City of Rheine in Northern Münsterland.
Posted by Tancred at 1:02 AM