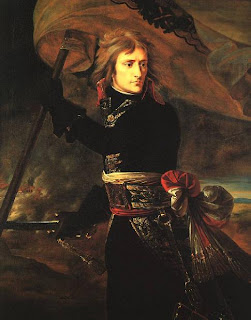 There is between Christianity and whatever other religions the distance of infinity..." So says Napoleon Bonaparte (1769-1821), emperor of France.
Napoleon expressed the following thoughts while he was exiled on the rock of St. Helena. There, the conqueror of civilized Europe had time to reflect on the measure of his accomplishments. He called Count Montholon to his side and asked him, "Can you tell me who Jesus Christ was?" The count declined to respond. Napoleon countered:

Well then, I will tell you. Alexander, Caesar, Charlemagne and I myself have founded great empires; but upon what did these creations of our genius depend? Upon force. Jesus alone founded His empire upon love, and to this very day millions will die for Him. . . . I think I understand something of human nature; and I tell you, all these were men, and I am a man; none else is like Him: Jesus Christ was more than a man. . . . I have inspired multitudes with such an enthusiastic devotion that they would have died for me . . . but to do this is was necessary that I should be visibly present with the electric influence of my looks, my words, of my voice. When I saw men and spoke to them, I lightened up the flame of self-devotion in their hearts. . . . Christ alone has succeeded in so raising the mind of man toward the unseen, that it becomes insensible to the barriers of time and space. Across a chasm of eighteen hundred years, Jesus Christ makes a demand which is beyond all others difficult to satisfy; He asks for that which a philosopher may often seek in vain at the hands of his friends, or a father of his children, or a bride of her spouse, or a man of his brother. He asks for the human heart; He will have it entirely to Himself. He demands it unconditionally; and forthwith His demand is granted. Wonderful! In defiance of time and space, the soul of man, with all its powers and faculties, becomes an annexation to the empire of Christ. All who sincerely believe in Him, experience that remarkable, supernatural love toward Him. This phenomenon is unaccountable; it is altogether beyond the scope of man's creative powers. Time, the great destroyer, is powerless to extinguish this sacred flame; time can neither exhaust its strength nor put a limit to its range. This is it, which strikes me most; I have often thought of it. This it is which proves to me quite convincingly the Divinity of Jesus Christ.

Also check out on the relationship between Napoleon and Pius VII.

It's been nearly 200 years since Napoleon died. How is it that this statement has just appeared?