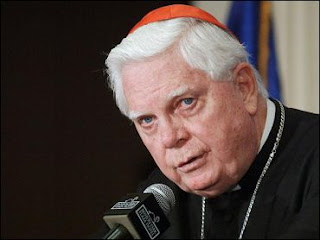 Photo stolen from, here, a blog incidentally, we don't agree with when it comes to Cardinal Law.  Cardinal Law's worst crimes were related in every way to the Faith.  It might seem to some that he was never sufficiently punished for that.  Unfortunately, most people don't see the link between homosexual predation and doctrinal heterodoxy and religious indifferentists and pagans like, say, Arturo Vasquez, don't help much when it comes to the understanding, because they themselves don't understand the Catholic Faith.
Posted by Tancred at 12:10 PM

You don't see much punishment in the Church of priests, bishops and religious; not like under secular laws.

I don't understand it. The dissidents are constantly preaching to Catholics. Surely that has to be a major reason why so many Catholics have left the Church. Although I believe that "divorce" is probably the principal reason why they fall away.

There are a lot of good orthodox preachers. But their messages don't seem to be getting to the pews. Parish missions and retreats are still pretty much a practice of the past.
Confession lines are rarely long.

I just noticed; Cdl. Law was born in Mexico

Confession lines are pretty long at the more conservatives parishes.