The Pope Plans to Allow Women to the Office of Lector 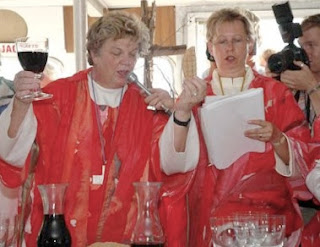 Editor: It's just a matter of time?

Vatican City (kath.net/KAP) Benedict XVI is evidently planning to allow women to act as lectors at services. This was confirmed by the new prefect of the Vatican Bishops Congregation, Cardinal Marc Ouellet, this Thursday afternoon.  Ouellet outlined this in the context of the post-synodal document "Verbum Domini" by Pope Benedict XVI., which dealt with "The word of God in life and in the mission of the Church".

In the 220 page document on the structure of the recommendations of the Bishops Synod 2008 dealt with the necessity of a "rediscovery" of the Bible for the life of the Church, for the engagement in society and for inter-religious dialogue.

The Pope recalled among other things the liturgical rules of the Mass in the document: "As is well known, the Gospel is announced by the Priest or Deacon, the first and second reading in the Latin tradition, however, can be assigned to a man or a woman."

Lectoresses will now no longer be the exception.

Till now it has only been men who've been assigned to read the first and second reading, even though in many parishes in the German-speaking world it has turned out otherwise.  That either men or women could be assigned in the lector role was actually foreseen as an exception.

From the outset on, lectors -- consistently men -- were authorized by the local bishop in the majority of cases.  Besides these lectors assigned as needed by the Bishop, baptised women and men were assigned the  role of reader in the Mass out of necessity.

Till 1972 the lector and acolyte (Altarservers) were assignments reserved for "lower ordinands".  Since 1972 both assignments are no longer tied to one who is ordained.

By the presentation on Thursday afternoon Cardinal Ouellet pointed out that the Pope  seized upon this indirectly from "Proposal 17" of the Bishops Synod on the Bible of  2008: "The Synod Fathers desired that the office of lector should be open also to women -- that therefore ought to take place. And the Holy Father studied this matter intently."

The German edition of Radio Vatican speculated that with the preparedness of the Pope to allow women as lectors, this could also open the way for discussing allowance of women in the office of the diaconate. The possible renewal, of which Cardinal Ouellet speaks, does not mean altogether a step toward the direction of lay preachers, says the broadcaster.

The French Catholic newspaper "La Croix" also took a look on Friday at the expressions of the new papal document with regard to Judaism.  As the paper recalled, it happened two years ago for the first time that there was a Jew who was invited -- a head rabbi from Haifa, Shear-Yashuv Cohen -- to be a lecturer at the Bishops Synod.  And Benedict XVI had explained in his writing, how valuable the dialog with Judaism is for the Church. "We are close together as we share the same spiritual roots.  We encounger one another as brothers -- brothers, who in certain moments of their history have had a tense relationship, but who've now decided to take pains, to build bridges of understanding and friendship", it was said among other things.


Link to original at kath.net...

Stephen Kiechle SJ,will applaud too, here.
Posted by Tancred at 12:05 AM

i read blog very carefully and share this point....

Inspired by the Church of the Holy Sepulcher in Jerusalem, which had been built by Constantine and his mother St. Helen in 326, St. Stephen's was constructed and dedicated by Pope Simplicius in the late 5th century on the site of an old ....

The nonsense continues. How arrogant to ignore the Tradition of the Church in order to pacify feminists.

What would the difference be between a "reader" and a "lector?" A sub-sub-deacon dalmatic?

No difference. The distinction is that women and men can function as readers without being "instituted" or "ordained". It's lame.

If ordination is not and has not been a prerequisite, why would is be so astonishing for a woman to be lector?

Keep women silent in the church

Too hard to understand?

They can ask their husbands later.

It is increasingly evident that Pope Ratzinger has not unloaded the anti-traditional baggage he has been carrying since his youth and his love feast at Vatican 2.

Yes, he has done a few fine things and, yes, we still have to keep praying for him. But my prayer is that God will have pity on his suffering Church and give us a great, good and courageous Pope at last, after nearly 100 years in the Papal desert.

I think he's floating this out there to see if it swims. He's already done something similar with the whole question of limbo.

Let these revelations continue, as long as they are not attempting to any legal effectiveness or commands.