With Alb and Stole: He Didn't Have His Rubber Ducky 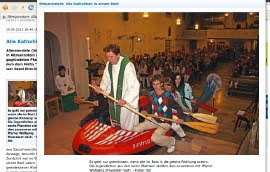 A priest in the Diocese of Regensburg played Church Captain in an inflatable boat during Mass. For the Novus Ordo Eucharistic Celebration is an empty euer, which must be filled with just about anything.

[kreuz.net] Recently, Pastor Wolfgan Stowasser presided over a youth Eucharist in the Village of Altmannstein -- in the Upper Bavarian County of Eichstaett.

This was according to the regional news 'Donaukurier' on the 20th of September.

The Parish Union belongs to the Diocese of Regensburg, which is led by facade-conservative Bishop Gerhard Ludwig Müller.


Entertaining Events for the Indifferent

The Motto of the Youth Mass reads "We'll be more".

Around 300 partly advanced in years appeared for the New Mass.

The "central theme" through the introduction was the expression that all believers sit in a boat -- said the 'Donaukurier'.

During the event -- supposedly to preach --- Fr. Stowasser played in a sketch.

For this he posted in the place of a Novus Ordo table (altar), a bright red rubber boat.

In alb and stole the Minister -- together with some of the youth from the six parishes -- into the inflatable boat.

The high=point of the deeply grounded teaching piece consists in this, that the boat's occupants are shown, wanting to go in different directions.

But wait, there is a happy end: they all agree to a direction, around the Church together, paddling to the altar-table:

"That's the way with the Parish Union" -- explained Fr. Wolfgang Stowasser to the 'Donaukurier' the moral of the story.

He was described in the paper as the "Captain".

For the collection the Pastor didn't collect money, rather he distributed "friendship bands".

How does this not go unpunished?

Believe it or not, these things are punished. Give it time. Either in this life or the next, it will be.