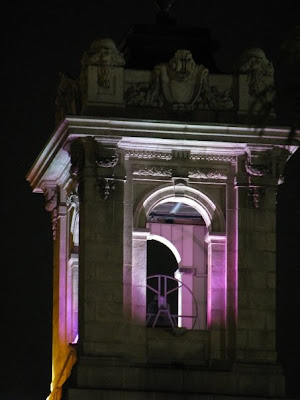 In a letter to a local Minnesota paper, Father Michael Tegeder recently insisted, on October 3rd, upon demonstrating his resistance to Church teaching on homosexuality in defense of one of the Basilica of St.Mary's long-time (at least 12 years) promoters of sodomy, Lucinda Naylor. He isn't just "out on a limb" of dissidence, he's been steadfastly resisting Catholic teaching throughout his priestly career and it's amazing that he, like many other Priests, administrators, communications directors and teachers in the Archdiocese continue to hold their jobs and bloat the Archdiocese's payroll and will eventually have to be taken care of when they have to mercifully retire.

According to Father Tegeder, Archbishop Nienstedt had threatened him with interdict and excommunication already for the "cremation garden" at his (sinfully minimalist) suburban church. In response Father Tegeder provided the Archbishop with documentation suggesting he had complied with the Church's rules regarding burial of the dead; said practices and customs are, no doubt another victim of post-conciliar ambiguity. There seems to have been no repercussions for this priest who insults the company he works for and his boss with impunity, but he's been doing it for a long time and while it hasn't gone undocumented or unnoticed by others more vigilant than the Archdiocese's disciplinary authorities, it has certainly gone unpunished, with the predictable result that the perpetrator can set alternative standards for others to follow and inevitably be confused about.

Of greater interest is his reliance on Cardinal Schönborn as an improvised shield quoted here from NCR:

In his letter, Tegeder said it was "most scandalous" that Nienstedt "comprised his office with the use of anonymous money." He said the campaign leaves the impression "that political funding is at work here."

He also cited comments last spring, reported in the German press and in the British Catholic publication The Tablet, by Austrian Cardinal Christoph Schönborn of Vienna, who told an interviewer that the church "should give more consideration to the quality of homosexual relationships. A stable relationship is certainly better than if someone chooses to be promiscuous." The Tablet also reported that the cardinal said lasting gay relationships deserve respect.

++Schönborn, as Tegeder noted, is a close friend of Pope Benedict XVI and a principal author of the Catechism of the Catholic Church.

In an interview Oct. 4 with NCR, Tegeder said he had received overwhelmingly positive response to his letter, but had not yet received any reaction from Nienstedt.

Photo: Taken in the spring of 2008 of America's First Basilica in Downtown Minneapolis
Posted by Tancred at 5:59 PM