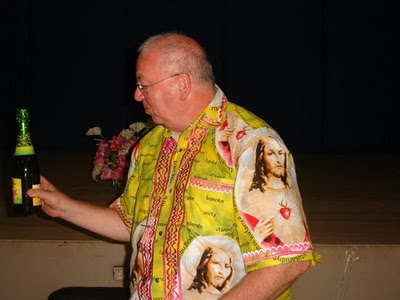 Editor: some of you will recall this Bishop from the time he tried to destroy a traditional parish in his diocese which resulted in the "Revolt of Thiberville". His unnatural taste for such destruction continues.


This summer a French Bishop showed what it means , in contrast to the Society of St. Pius, to remain in "full communion" with the Pope.

[kreuz.net] Bishop Christian Nourrichard (62) of Evreux has participated in the ordination of eleven men and 13 women to Anglican orders.

This was reported by the French District Superior of the Society of Pius X, Father Regis de Cacqueray, on the 15th of September in a broadcast.

Evreux is a city with a population of 50,000 in Northern France.

Msgr Nourrichard has been office since 2006. From January 1995 his Diocese had been headed by the notorious Bishop Jacques Gaillot.

The Anglican ordinations were officiated by the retired Bishop of Salisbury, David Stancliffe (67).

Entrance as a Catholic Bishop

Msgr Nourrichard appeared at the consecration simulation in a choir robe with alb, stole, pluviale, mitre and pectoral cross. He was accompanied in any case by two Lutheran Bishops.

At the event 13 women and 11 men were ordained as Anglican ministers.

The news of the Diocese of Evreux reported the participation of the Bishop in this ceremony without criticism.

The readers were not informed about the invalidity of the "ordinations".

The Bishop of Evreux and his Diocese are reported, in "full communion" with the Apostolic See. 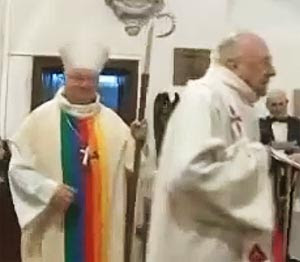 Ecumenism only with the Enemy

"How could believers understand that it is impossible to ordain women, when a reigning Bishop honors such a ceremony with his presence?" -- asked the French District Superior in a commentary:

"How could the believers understand that the Anglican ordination is invalid, if Msgr Norrichard participates in it?"

For the district superior the moral pursuits are such, that strive to admit the Faith, and to celebrate worthily the Sacraments and the Church teaching as well as the the singularity of the remedy in the face of such inconsistency "in the motive of healthy pride".

Father Cacqueray reviewed in his commentary the words of Archbishop Marcel Lefebvre during the priestly ordination of the year 1988: "We find ourselves in a state of emergency".


photo from: the last papist