What is The Real Threat to The Unity of The Roman Rite? Cardinal Ratzinger's Letter. 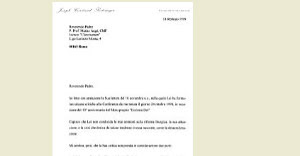 In 1999 then Cardinal Joseph Ratzinger answered the objections of an old liberal Roman Liturgist. Now the letter is on the internet!

[kreuz.net] On the 16th of November 1998 the old liberal Liturgist and Claretian, Father Matias Augé (74), wrote a letter to the former Prefect for the Congregation of the Doctrine and the Faith, Joseph Cardinal Ratzinger.

Father Augé is from Spain. In the late 90s he was a Professor at the Benedictine Liturgical Institute 'Sant'Anselmo' in Rome, on the theological faculty of the Papal Lateran University and advisor to the Vatican Congregation for Liturgy.

In his letter he had criticized a proposal by Cardinal Ratzinger to keep the 10 year anniversary of the Motu Proprio 'Ecclesia Dei' on October 24th 1998.

He could not understand how one could celebrate the Old Rite, without contradicting the Constitution of the Council -- exclaimed the priest to the Cardinal.

For the Tridentine and the effective Rite are a single Rite -- namely "the Roman Rite in two different phases of its history".

Father Augé also mentioned in his letter that a return to the Old Rite brings with it the danger of destroying Church unity and bring into question the decisions of Pope Paul VI (+1978).

The then Cardinal Ratzinger answered the priest on the 18th of February 1999 in a personal letter.

The exchange of letters was recently published by Father Augé on his Weblog 'liturgia-opus-trinitatis.over-blog.it'.

In his answer Cardinal Ratzinger then recalled that a "not inconsiderable number of Catholic Faithful, mostly of French, English and German language are very strongly attached to the Old Liturgy."

John Paul II. did not have the intention to review for them what happened in the year of 1970 -- "to impose a transitory period of only six months in the extremely abrupt manner as the New Liturgy was."

The then Cardinal mentioned that the "respectable" Liturgical Institute of Trier recommended a time frame of about 10 years for such a transition.

So, it was necessary upon the question of the authority of the ruling Pope and his respectful pastoral disposition to take them into consideration.

The Old Rite Must Help the New Mass

Cardinal Ratzinger made it clear that the unity of the Roman Rite is not today "threatened by a small community, who use the Indult [Permission to Celebrate the Old Mass] and are generally treated like they have the plague, as people not understood, if not even possibly doing something immoral."

"No" -- insisted Cardinal Ratzinger: "The unity of the Roman Rite is threatened by wild creativity, which is often encouraged by the Liturgists."

He reproved the project in Germany, "Missale 2000" which propagated the argument that the Missal of Paul VI. was already obsolete:

Then the Cardinal brought his hope to expression that the presence of the old Missal will form a Dam against the sadly common aberrations of the Liturgy and to serve as an example of "authentic reform".

Today's Pope has sharply criticized the claim that the Old Mass threatens the unity of the Roman Rite:

"That the use of the Indult of 1984 (1988) stands against the unity of the Roman Rite, is in my experience a disposition, that is very far from reality."

In conclusion he stressed his regret that the priest had not noticed in the proposal the "invitation to the <
Posted by Tancred at 1:14 AM