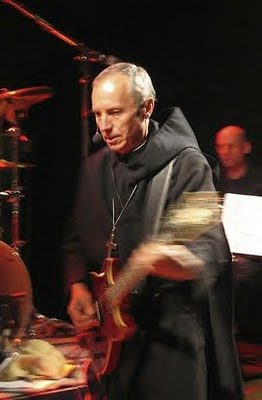 [Radio Vatikan]The Abbot Primate of the Benedictines, Notker Wolf, warns of a slanted view of the Church. He said this to a group of mass servers from his Bavarian homeland on Tuesday from the Benedictine Center of Saint Anselmo.

"What has bothered me the whole time: everything depends on the Pope and Mixa -- I don't believe either in the Pope or in Mixa, rather Jesus Christ, and that is final! That the Church is human, let us not be mistaken -- it was always thus. And we are indeed only human. But I believe, it is completely important that we see: We believe in the Church and we believe in Jesus Christ! And the Pope is just in the Church is -- but he's also a man at the head. He can't do everything..."

Abbot Notker advised that Catholics should not nurture an illusory, withdrawn image of the Church. Notker is also famous a Rock Musician and Bestselling Author: "We always want a Church beyond the clouds, almost without body and soul."

Even today the Church is capable of giving the seeking person a footing, says Abbot Notker. He pointed to the headline of a newspaper, that showed the memorial service for the victims of the Duisberger Love-Parade: "There is the Chancellor, Merkel, the President (Wulff), the President of the Parliament (Lammert)-- and where are they standing? In the Church! Who really has the time or the power in the main, to show a sign of hope in this mad emergency. This is our Faith, that is our Church! I don't believe that anyone in the Mayor's office of Duisburg has received much mercy... rather the people have found mercy from God. And not just anywhere from God, but in an absolutely concrete way in the Church!

This is the man responsible for giving shelter and temporary residence to Francisco Schulte, here.

Photo credit: Idle Speculations.
Posted by Tancred at 8:32 AM

I cannot say what I am thinking...must think of the edification of the faithful and the salvation of souls...darn!
What a bunch of hoo-ha.
Thanks for this post...we live by the spirit of the Rule of St. Benedict; I'll make it an ever great reparation for his sons that do what it is that they do that is well....you know!

Perhaps this aged hippy (now 71 years of age and a known radical dissenting liberal), wold do best to resign his position in Rome, retire to a cloistered monastery and spend the rest of his life in penance and repentance for leading young souls into evil by his comments...not to mention the 8,000+ monks and 9,000 Benedictine cloistered nuns that he has beenat least a symbolic leader of for the last 10 years. Under his watch the Order has declined further.

Perhaps it is time for him to resign/retire....or be forced out by the Pope he so much despises!!