A priest speaks on the situation of Christians in Iraq 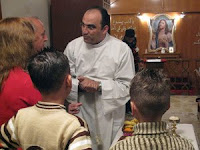 The following is an interview by Katholische Nachrichten Agentur about the situation in Iraq.

"Europeans do not know who we are"

There are few Christians in Baghdad. Saad Sirop Hanna (45) is one of the last priests in the Iraqi capital. He heads the Chaldean Catholic community of St. Joseph. Hanna, who himself comes from Baghdad, has decided after studying aeronautical engineering to theology and the priesthood. In the interview, the Catholic News Agency (KNA) Hanna reports on the life of the last Christians in Baghdad.(Image: Flag of the Chaldean Catholic Church)

KNA: What is the situation in your community here in Baghdad?

Hanna: We are Chaldeans, our church was built in 1959 and is the largest church in Baghdad. Because of emigration are now living in our community still about 400 to 500 families. Previously we had up to 1,500 families. As you saw, our churches are under police protection. The officials in front of the church are Christians in the police service.

KNA: When you decided in 1995 to become a priest, it was a very difficult time for Iraq.

Hanna: Yes, yes, we lived under a ban. But in terms of safety, it was better then than now. Since 2003, there is unfortunately no security in Baghdad, nor in most other cities of Iraq. There was bad and even worse years since then. 2004 and 2005, it was not as bad as 2006 and 2007, for example. 2008 there was again a bit better because the government campaigned for reconciliation. But it is still difficult. There are so many fanatical Muslims who now live completely different from our Muslim brothers and friends from the past. They think differently and they behave differently towards us Christians.

KNA: Why this change? What happened?

Hanna: After 2003 there is a misconception among the Muslims about the identity of Christian community here in Iraq. Many Muslims consider us as people from the West because we are Christians. It will bring us to the Americans and British in connection, because this way we are Christians. But we are different, and we constantly try to make that clear. Yes, we Christians like the Americans and Brits are, but we are Iraqis. Christianity in Iraq dates back to the first Century back, it is 1900 years old. The other issue is the political conflict between the Iraqi parties. A reconciliation between the Sunnis and Shiites is hard and we are in between.

KNA: Does the lack of knowledge about the Christians in Iraq to do with lack of education?

Hanna: I can only agree to a lack of education, humanitarian education. How to evaluate a person as a person and not whether he's Christian or Muslim. In general, the educational situation is very bad in Iraq. There is a lack of good schools, good teachers and good textbooks. In this respect things must necessarily change.

KNA: Many Christians have been threatened, kidnapped, killed. Have you had bad personal experience?

Hanna: Yes, I was on 15 August 2006 kidnapped. I was the first priest in Baghdad who was abducted. 28 days I was in the hands of a fanatical Muslim group. In that time I have learned a lot about myself and about the relationship between the religions. 2008 I came back to Baghdad, because I love Baghdad. , I love Iraq and I love my people, so I wanted to continue working here as a priest. I also have a lot of Muslim friends here.

KNA: Do you feel sometimes forgotten by the Christians in Europe?

Hanna: Sometimes yes, even if we have a few priests and organizations, especially from Germany really good relationship. For example "the Church in Need helps many people here in Iraq and has also helped me. But sometimes I get the impression that in Europe does not understand the history of Christians in Iraq. The Europeans do not know who we are, how we live here, what we do here, they know our church does not, they do not know how to pray. It is so important to exchange ideas in order to understand how faith has been implemented in different societies. (By Karin Leukefeld - CBA)

Interview from KNA cited on the Angelus Press German Site of the SSPX.

Similar article from the Tablet, UK, which claims that a younger priest of the same name was murdered last year. Father Hanna was kidnapped, but released by his captors, thank God.
Posted by Tancred at 9:10 PM