The Case of Baoding and the Pope's Letter 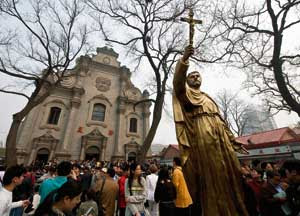 The true story of Bishop Francis An Shuxin: imprisoned and tortured by the Communists, betrayed by Catholic authorities and sold out by Paul VI, this great Bishop kept his faith in the near absolute moral darkness of the 20th Century.

Baoding is not difficult to reach, by road or rail. It is less than 150 kilometers south of Beijing. The polluting industries were dismantled some time ago there, and they started making wind turbines and whatever was needed to derive energy from sun, wind and biomass. That is why reports in government newspapers extolled it as the capital of renewable energy, the Chinese model on the road to sustainable development. But for those who know even a little of the recent history of Catholics in China, Baoding is a place like no others. And for quite different reasons.

The name of the city in Hebei province, where currently less than one million people live, comes up often in the chronicles of Chinese Catholicism in recent decades as the epicenter of sensitive and controversial issues. It was in Baoding that in 1981 Bishop Joseph Fan Xueyan began to ordain bishops in clandestine fashion, outside the interference and control of the “patriotic” bodies imposed on the Church by the religious policies of the regime. An initiative approved after the fact by Pope John Paul II, and fraught with consequences. From there developed like lightning the network of “clandestine” bishops, those not recognized as such by the government, who set themselves at the head of that part of the Catholic Chinese – priests, religious, communities – which was unwilling to subject their ecclesial life to the control of the Party.

Thirty years later, Baoding again became the center of a controversy reminiscent in some ways of the way chosen at the time by Joseph Fan. Everything revolves around the case of a clandestine bishop who decided to come out into the open and to exercise his pastoral mandate by accepting procedures imposed by the civil authorities. His decision has triggered a storm of poisonous controversy that for months has been rending the Catholic communities of the region, and even involving the Vatican. The story is confused, and so far some partial and tendentious reconstructions put on the net by agencies and self-styled experts have encouraged misleading interpretations. But two documents, still ignored by the attacks of the western news agencies, throw full light on the concrete dynamics of the happenings and the reasons of the people involved. Showing up against the light the implications and the real contours of the larger issue that has opened around the case.