1,000 Migrants At Karlsruhe Castle — Throw Fireworks at Those Celebrating 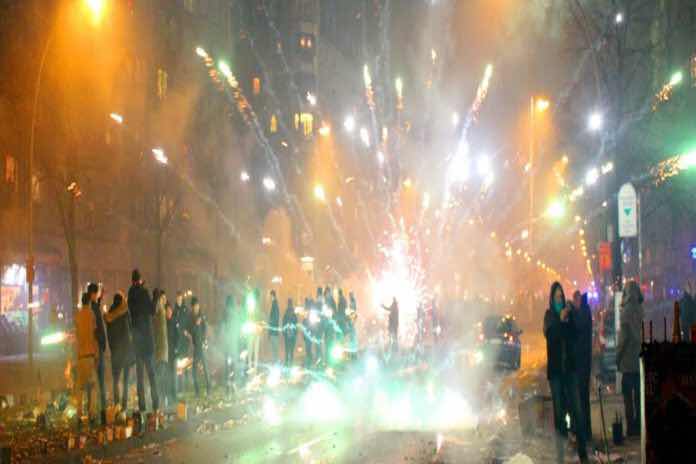 (ots) - In the area of ​​responsibility of the police headquarters Karlsruhe New Year's Eve in the entire service district was initially quiet, from midnight there were always small fires, especially trash or old clothes containers, trees and also to offenses and disturbances.
The police already carried out presence and control measures in the early evening. In total, more than 230 policemen and police were on duty to handle 535 missions. 65 disturbances were recorded. In addition, 25 offenses, nine thefts and nine violations of the Weapons and Explosives Act were reported. There had to be a total of 42 place referrals. Two teenagers were found significantly intoxicated. A sexual assault was reported to the police during the night. 17 people were arrested and 25 people had to spend the night in police custody.
As in the past turn of the year, several thousand people gathered in public areas in the city of Karlsruhe. Around 2,000 people were counted on the Schlossplatz, about 1,000 of them with a migrant background, who were noticed engaging in the improper handling of fireworks and shot them into the crowd. A 3-year-old girl suffered an eye injury and had to be treated in a hospital. Presumably due to the exposure of the firecrackers, most of the visitors left the location. An Afghan-Syrian group of about 20 people committed three offenses. The suspects were arrested.
At 9 pm, a garbage bin burning directly against the wall burned a house down on Ebertstrasse. The fire had already spread to the wooden backyard door and another garbage bin. The apartment building had to be evacuated. The cause of the fire is still unclear.
At around 10:00 pm there was a brawl in the Karlsruhe-Durlach area between five people and a police unit with pepper spray and resistance against enforcement officials. A police officer suffered a knee injury.
Eight garbage containers went up in flames. Around 00.30 hours a car fire was reported in the Insterburger road. At 1 o'clock, unknown persons damaged the exit mirror at the service building of the Federal Public Prosecutor's Office in Brauerstraße.
Probably fireworks set a fire in Pfinztal in the castle garden street around 2.00 in a carport including the parked vehicle. The Fire Department of Pfinztal enaged with 29 units and was able to extinguish the fire. The property damage is estimated at around 15,000 euros.
Several trees were in flames in Karlsruhe district. At midnight in Kraichtal in the Südendstraße, around 0.15 clock a tree burned in the Richenstraße, at 3.20  a bringing tree was reported in Bretten in the Bahnhofstrasse.
In Walzbachtal-Jöhlingen in the Jöhlinger road a fire was set  at 0.45 and burned a passenger car.
Presumably two groups of offenders, who committed a total of five robbery offenses in the city of Pforzheim, kept the police in readiness. In east Karl Friedrich street presumably two young people robbed 20 Euros after a physical assault and threat from a knife from the injured party. In Leopoldstrasse, two perpetrators held out a knife to their victim and robbed some cash. Two perpetrators committed three robbery offenses holding a knife in the wider area of ​​the station square for small amounts of cash. The investigation is ongoing. Shortly after the turn of the year Leopoldplatz experienced considerable disturbances in the presence of 500 people, most of them with a migrant background, firing fireworks at firefighters and damaging their uniforms. Luckily nobody was injured.
After disputes in the area of ​​the police station Mühlacker  a  34-year-old received superficial stab wounds in his stomach from his two companions with a knife and was arrested.
In Neulingen-Göbrichen unknown adolescents removed three manhole covers in the Bauschlotter road around 0300 whereupon a car driver damaged her vehicle while driving over a lid. This was the cause of a dangerous interference with road traffic.
In the district of Calw, New Year's Eve was largely quiet. In Dobel a trash can burned around 23.30. In the Calw area several fires were reported, which then turned out to be a false alarm So the suspicion of a hedge fire in the Breiten Heerstraße was not confirmed, just like an alleged hedge fire at 01.30 in Holzbronn. Around 00.15  a rocket landed in Bad Wildbad in the Wilhelmstrasse on the balcony. Fortunately, the fire brigade was also unable to detect a fire in this case.
Trans: Tancred vekron99@hotmail.com
AMDG
Posted by Tancred at 7:10 AM